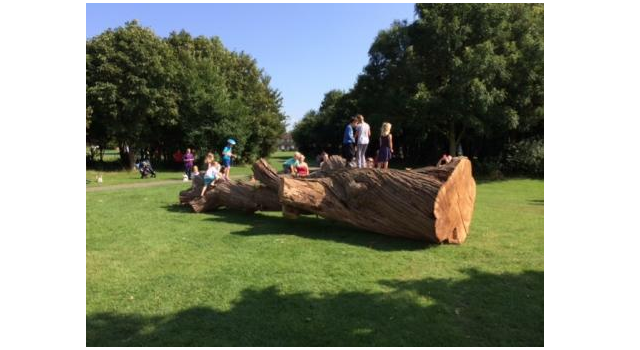 THE SWEET chestnut tree in Castle Street was cut down last week after being deemed a safety hazard.

The tree, by the vicarage near St Mary’s Church in Thornbury, which protruded onto the pavement had restricted the path to being 33 inches wide and was originally marked for felling because of the risk of bark falling on to passersby.

Thornbury Town Council was given a grant of £2,600 by South Gloucestershire Council (SGC) to fell the tree and SGC then moved it on to Streamleaze Green where plans are in place for it to be sculpted.

These plans will be discussed at Thornbury Town Council’s Environment Committee meetings on Tuesday, September 9 and Tuesday, October 14 which the public are invited to attend.

The tree surgeon had to remove many of the tree’s side branches to enable it to be transported to its new location.

They said that whilst the main trunk was solid there was a considerable amount of rot in the branches, which were beginning to degrade quite badly.

Town mayor Cllr Guy Rawlinson said: “Losing a tree, which was at least 200 years old is always a sad occasion, but it now has a home on Streamleaze Green where it will be enjoyed as a local feature.

“Within hours of it being moved there were children climbing over it. That could not have happened when it was standing on Castle Street!”

Sarah Dodd, who has lived in Thornbury for all of her life, was unhappy that the tree had been cut down and believes that more respect should be paid to it now that it has been removed.

She said: “So many people are unhappy with this; the tree was probably there when Henry VIII visited the town hundreds of years ago.

“It was a beautiful old tree and it being cut down makes you feel horrible. I’ve lived in Thornbury for all my life and that tree has always looked like that.

“It should be moved to the high street or the church and not just be plopped down on Streamleaze Green where children will wreck it.

Sarah, 42, who lives in North Road in Thornbury, added: “It needs to be appreciated, they should make a story about it not a sculpture where children will wreck it and probably set it on fire.

“I cannot believe they cut it down, they’ll never be able to fully get rid of the tree unless they take up the road as the roots must go all the way across the road.

A SGC spokesperson said: “The tree was removed following discussions with the Town Council and local residents, as it was limiting the width of the footway for pushchairs, wheelchairs and the visually impaired.

“The remaining stump will be removed on 20 August and the footpath re-tarmaced the following day.

“The tree trunk was relocated to Streamleaze public open space so that it could be used for natural play by local children.”

An application for an Environmental Grant was agreed at a town council meeting back in January after councillors decided that the path being restricted was unsafe for wheelchair users and for buggies.

Twelve members of Thornbury Town Council voted to apply for the environmental grant from SGC.

Independent Cllr Graham Lanfear had opposed the motion fearing Thornbury Town Council would have to cover with the balance of the cost.

The Environmental Grant application for removing the tree was approved by South Gloucestershire Council in April who will now reinstate the path following the tree’s removal.