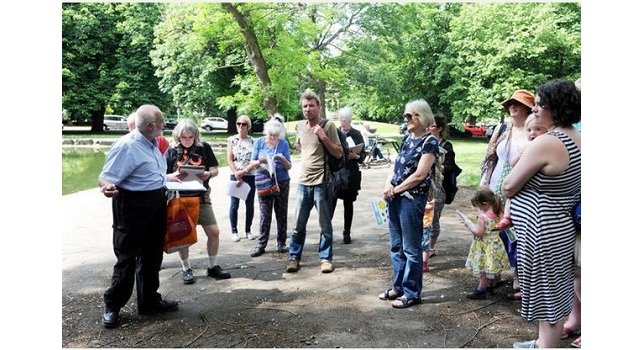 Scores of young children and curious adults converged on Pearson Park as more people than ever joined in with a popular tree walk.

Ever since the Friends of Pearson Park charity was set up by a group of hardworking volunteers more than 10 years ago, the tree walks have been a regular feature in their calendar.

And under glorious sunshine this year, tree conservation officer Tim Beckwith led the biggest group of explorers yet around the park for the tree walk.

Mr Beckwith gave the group an intriguing insight into the history of the park and explained about the species of trees.

There was also colouring activities for the children to keep them entertained en route around the 155-year-old park.

Susan Harr, 75, who is secretary of the charity, was delighted to see so many attend the walk and hopes that it showcased the heritage of Hull’s first public park.

She said: “We usually get a fair few people who come down to the park and seem to be interested in learning but this one was probably the most we’ve ever had.

“Tim gave a great talk about the trees and we really appreciate the time that he gives up because he really is an expert in that field.

“We are always very keen as an organisation to stress the natural and heritage aspects of the park.

“It is a playground and people go there to kick a ball and have a picnic but we want to stress the heritage, not least because we are applying for grants under the Heritage Lottery Fuin.

“We really want to promote the natural aspects of the park, including all the trees, shrubs and fauna but also the history of the place.”

With more youngsters than ever attending the event on June 1, Ms Harr hopes that the tree walk has encouraged the next generation of children to respect Pearson Park and take good care of it in the future.

“For our organisation, it means a lot to pass on some wisdom to the next generation,” she said. “I was brought up here so it’s part of my history and I’m sure it’s part of a lot of other people’s too.

“We want to remember its natural beauty and the legacy of Zachariah Pearson. It’s a unique park which should be celebrated.”

Friends of Pearson Park is made up of a band of volunteers who work with the trustees of the park to make it as attractive as possible, create a space of peace and harmony and to preserve the park’s Victorian character.