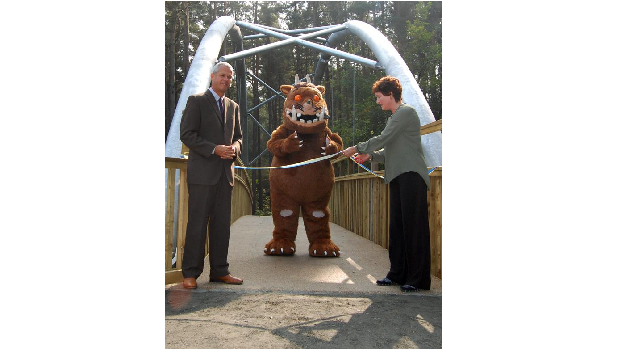 A NEW bridge is opening up part of Hamsterley Forest for visitors during its busiest year in history.

The bridge, which is now open to the public, crosses Bedburn Beck to create a circular trail which links the forest’s cycling and walking trails to the visitor centre and car park and improves disabled access.

It is part of a £300,000 investment to transform the popular visitor attraction, and has been part of the forest’s master plan since 2009.

The bridge was officially opened by Melanie Sensicle, from Visit County Durham, Andy Tordoff, from Defra, and the Gruffalo.

Ms Sensicle said: “I’m so pleased to be here to celebrate this milestone in Hamsterley’s development. I’ve been here eight years and compared to when I first came down the trail it’s completely transformed. It looks fantastic and the amount of people enjoying a beautiful day out in Hamsterley is wonderful.

“2013 was the best ever year for Hamsterley with about 210,000 visitors and it looks like that might be broken this year. Hamsterley is really on the up and the bridge is a really significant addition.

“It’s another step along its development into being a very significant visitor attraction for Durham and the North East of England.”

The bridge, which was designed by engineer Ian Familton and built by Metcalfs and Walton builders, was described as “spectacular” with “the look and feel of the North East.” It was funded by the Northern Lands Project, which develops tourism in the North East’s protected landscapes.

Alex MacLennnan, project leader for the Forestry Commission, said: “I’m really pleased with the work. It creates access for people in wheelchairs and buggies and it’s just fantastic.

“It’s been part of the master plan since 2009 and we had the vision for the bridge but without the Northern Lands project we couldn’t have achieved it.

“We’ve had a number of projects come together and we’re so pleased this is the best ever year in Hamsterley’s history.”

Other work done in the forest includes the new visitor centre, renovated bike trails and the creation of a new mountain bike trail. Among the backers are Durham County Council.

Proposals in the pipeline include a GoApe adventure park and a bid to create the longest zip wire in the country.

Trailblazer mountain bike club member Kaye Graham, from Barnard Castle, said: “I’ve been coming here since I was about 12 and I still come a couple of times a week.  Until the last few years it hadn’t changed much but there’s been a lot of really positive developments in the last few years.

“This new project opens up a whole part of the forest and we’re grateful for it.

“It’s good because it’s flat and on a loop. We’ll use it for children’s coaching so it will be useful for younger children.”