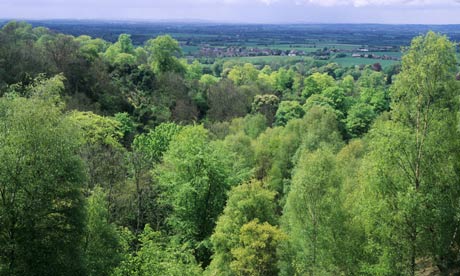 Scientists at the University of Twente and at Forest Research, the research agency of the British Forestry Commission, used the UK Climate Projections 2009 data in models to show reduction in forest production by up to 42% by the 2080s due to climate change. The researchers studied three major tree species: spruce, pine, and oak, which together make up 59% of the British public forest area. Thanks to this new information, the forestry industry can anticipate by re-distributing tree species when restocking existing woodland or planting new woodland.

For the first time the study provides a probability-based risk assessment of drought impacts on forests. Michal Petr assessed these impacts during his doctoral studies at the University of Twente’s Faculty of ITC.

Petr discovered that tree species currently planted will no longer be a viable choice for production forestry in lowlands across Great Britain over the next sixty years due to sharp growth reduction. In the Scottish uplands the estimations are more positive, because moist conditions will remain more favourable for major planted species. However, even there, spruce yield could drop by 30% from the current values to more than 50% depending on the assessed worst, medium, and best case IPCC emission scenario.

Petr estimated production changes for a number of 25km2 areas across Great Britain for the next seven decades. He combined the likelihood of drought with production curves to assess the overall potential risk for forest production. Petr’s work suggests that it is unwise to continue with the current species composition if tree growth and yield are to be sustained. Promoter Luc Boerboom added: “Although this study does not provide the complete picture, it is the first time we have quantified risk in Great Britain, on which policy makers and foresters should act.” Dr Mark Broadmeadow, principal climate change adviser for Forestry Commission England commented “We welcome this valuable contribution to our well-developed programme of research into, and understanding of, the likely effects of climate change on British forests. It will add significant value to the guidance we can give to forest managers to ensure that their forests will be resilient and productive over the coming decades.”

The British forestry sector is financially important for rural communities and it depends on healthy forest ecosystems. Boerboom: “The timing of this study is actually very good because it takes about fifty, sixty years for foresters to change those forests that need changing. Hence, we can still be in time.” Boerboom: “The results of this study cannot be extrapolated to the rest of the world. However, similar effects have been estimated by other studies and these results enable us to estimate more reliably the impacts of drought on spruce, pine, and oak. In the Netherlands we have much less forest production than Great Britain. However, we too can expect change: our grandchildren will walk and bike into a different kind of forest than we do now.” Petr’s research was funded by the ForestClim project.