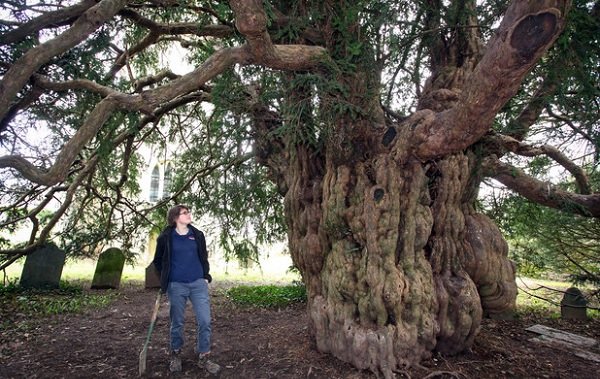 One of Britain’s oldest living things which dates back to when Jesus Christ was walking the Earth is still growing. The ancient yew tree in a church graveyard is believed to date back up to 2,000 years.

The tree on the Dartington Estate near Totnes has just been researched by Katherine Ross.

She is one of the estate team who has just completed a research project mapping the history of Dartington’s formal gardens visited by thousands of people every year.

The ancient yew tree is still alive and well and growing in the graveyard of the remains of St Mary’s Church which itself dates back to the 12th century.

Katherine said: “I’ve uncovered theories as to its origin and survival and I’d love it if any historians are able to confirm them.

“My research found that yew trees were planted as winter meeting places in the UK at a time when yew, box and juniper were the only native evergreens.

“A church was built around it.

“The rest of the yew tree population was obliterated to produce longbows but this specimen was protected as it was on religious ground.’

Katherine researches have also uncovered a hidden holy well in the estate gardens which had all but disappeared beneath ferns and other vegetation until it was rediscovered last year.

Much of the modern-day gardens at Dartington were designed by Percy Cane who was appointed by Dorothy and Leonard Elmhirst and advised on the gardens from 1945 to 1968.

Katherine has produced a 50-page research document which includes the uncovering the old holy well described as a long-hidden limestone water feature dating back to between 1660AD and 1750AD.