Rare trees planted to honour man who discovered them 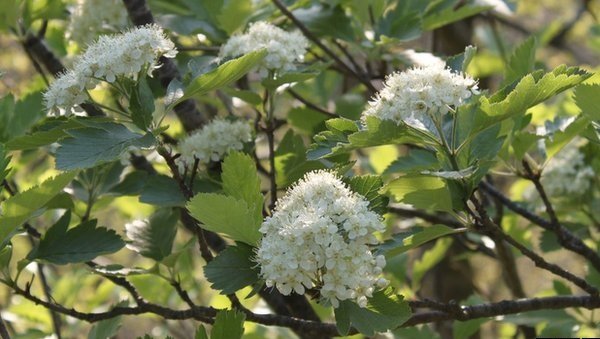 The widow of the man who found Wales’ rarest trees has been given 20 saplings to plant near his burial place.

Peter Charlesworth identified the Ley’s Whitebeam at a forest near Merthyr Tydfil in the 1950s, the only place it grows wild anywhere in the world.

The National Botanic Garden gave his widow Eirlys samples from conservation stocks which have now been planted in the Usk Valley, Monmouthshire.

Experts will be given reports on how the trees fare in the new locations.

The Ley’s Whitebeam (Sorbus leyana) is a hedgerow plant with white flowers and red berries which experts say likes limestone and sunlight but struggles to compete with trees like sycamore.

Only 17 examples are known to exist in the wild.

It was first seen by the Reverend Augustin Ley in 1896 but was largely forgotten for 60 years.

Mrs Charlesworth said her husband, who became chief forestry officer for England and Wales, was not long out of college when he identified the rare hybrid.

She said he never sought acclaim but introduced himself to staff at the National Botanic Garden in Llanarthne, Carmarthenshire in 2010 after reading a newspaper article about conservation of the rare tree.

Following her husband’s death in December at the age of 79, Mrs Charlesworth contacted garden staff to discuss a way of honouring his memory and was touched by their response.

“I asked if I could have a tree to plant in the natural burial ground at Usk for him,” she said.

“They said by all means, and gave me 20 trees on condition that we monitored and reported on their development.

“Peter was a private man – but he just adored trees.”

Dr Natasha de Vere, head of conservation and research at the National Botanic Garden, said they were pleased to help Mrs Charlesworth and welcomed her support for their conservation work with the Ley’s Whitebeam.

“She got in touch with us about a month ago to say that her husband had died and that she wanted a tree to commemorate his life.

“We decided it would be good to involve her in our experiment to see how the trees fared in different conditions.

“It’s a real Welsh speciality – you won’t find it anywhere else in the world.”

The trees have been planted around the Usk Valley by Henry and Rosie Humphreys, who own Usk Castle.

“We’re very pleased to be involved and couldn’t have thought of a better memorial really.”