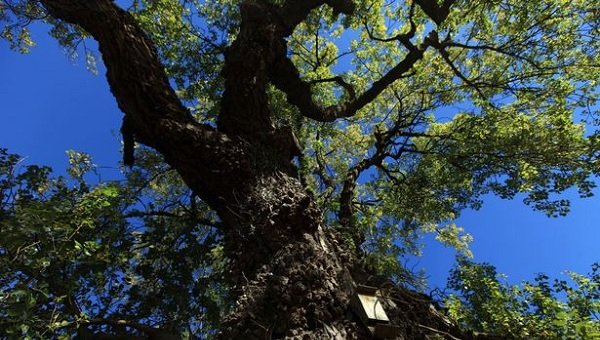 Voting has closed in a competition which could see a rare old Northumberland tree crowned the nation’s favourite.

A black poplar tree in the grounds of Acklington Church of England First School is one of 10 finalists in England’s Tree of the Year, organised by the Woodland Trust.

The black poplar is one of the rarest native trees in the UK, with only 2,500 thought to be left.

The Acklington specimen is estimated to be between 250 and 300 years old.

In 2010 health and safety bosses announced plans to fell the tree deeming it to be a risk to the pupils in high winds.

Pupils, school staff and villagers fought the bid and the tree was saved.

The poplar has since become the centre piece of the school’s logo.

Voting in the competition, in which Acklington is the only North East finalist, is now closed.

The school will find out later this year whether it has won.

Headteacher Claire-Marie Cuthbert said: “The Black poplar tree in the corner of the playing field Acklington C of E First School is one of only a few still alive in Britain. It is also believed to be the furthest north Black poplar in Britain!

“It has been growing there since before the school was built in 1852. It is estimated to be between 250 and 300 years old and has now been incorporated into the school’s logo.

“Fortunately it was saved from being felled in 2010 and has recently been in the running along with nine other trees in the ‘England’s Tree of the Year’ competition hosted by the Woodland Trust, the results of which are to be revealed later in the year.”