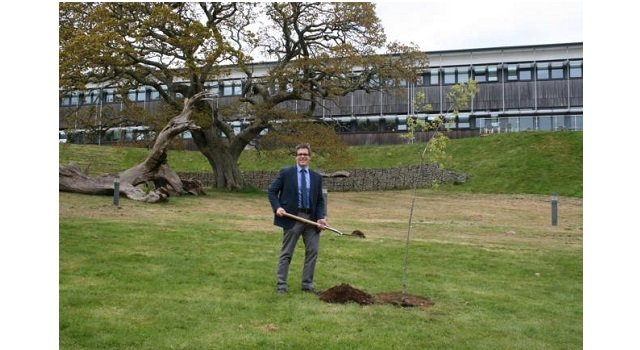 A rare variety of oak tree is the newest addition to the gardens at the University of Exeter’s Penryn Campus.

The special sapling was planted at a ceremony led by Professor Dave Hosken, the dean of strategic development for Cornwall. The tree, a gift from the University’s Streatham Campus in Exeter, has strong links to the Devon city – William Lucombe gave his name to the Lucombe Oak (Quercus lucombeana) having developed the hybrid from the Cork Oak and Turkey Oak in his Exeter nursery in 1762.

It is said that Lucombe was so impressed with the timber, that when he felled the original hybrid in 1785, he kept planks from it under his bed with the intention of using them to make his coffin. But Lucombe lived an exceptionally long life, dying at the age of 102, by which time the planks had unfortunately decayed in the Devon damp.

The Lucombe Oak will now add to the rich horticultural diversity found at the Penryn Campus and will be expertly tended to by the award-winning grounds team, led by head gardener, Toby Nenning. He said: “The new oak tree is quite special and has been planted between the two old oaks that formed the original hedgerow boundary seen on old maps.”

The Penryn Campus grounds blend historic sub-tropical planting with newly created landscapes to create visually stunning gardens that are a haven for a diverse range of plant and animal species. Visitors can take in the walled garden, herbaceous beds, sub-tropical planting, fruit producing orchard, Italian garden and terraces, the 18th century lime avenue, the historic rare rhododendrons, cultivated on the site in the Victorian era, and now the new rare Lucombe Oak.