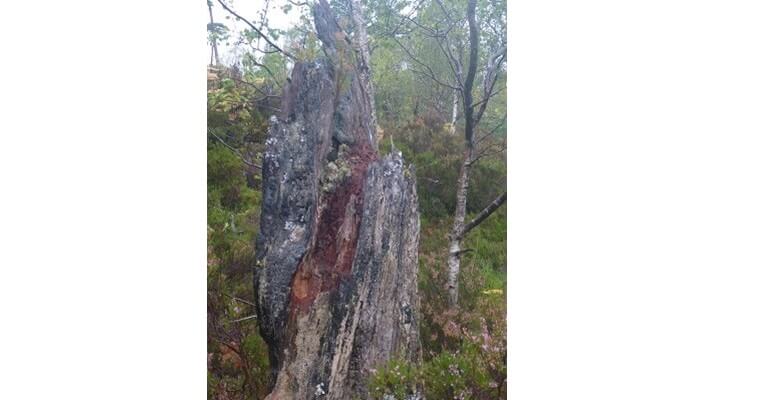 Scientists have discovered rare ‘fire’ lichen growing on the stumps of trees destroyed by flames in the Scottish Highlands during World War II.

The Carbonicola anthracophila was discovered by scientists surveying Loch Arkaig Pine Forest near Spean Bridge.  The lichen only grows on charred conifer trees. It has been recorded at three other locations in the UK:  Glen Affric, Glen Quoich and Glen Strathfarrar.

British Commandos and Allied Special Forces including the Free French trained at Loch Arkaig during WWII.  During exercises with live ammunition in 1942 forest fire raged across the hillside. Scots pines cooked in their own resin were preserved and still stand like ghost trees across the hillside.

Seventy-seven years on the ‘fire’ lichen is a living legacy of that blaze.
Woodland Trust Scotland bought Loch Arkaig Pine Forest in partnership with local group Arkaig Community Forest at the end of 2016, with support from players of People’s Postcode Lottery.

The lichen survey was commissioned by experts Andy Acton and Brian Coppins to help inform long-term conservation management at the site.

The four-day survey found around 150 different species. In their report the experts said they had only scratched the surface of what the forest might hold.

The Carbonicola anthracophila was found on just two tree stumps.
Andy Acton said: “It was the first time I had seen this particular species so it was particularly exciting for me, but Brian referred to it as a ‘mega tick’ so he was clearly excited too. Brian found it first then the hunt was on for more, and I went on to find it on another stump.”