A rare Handkerchief tree has blossomed in Leeds 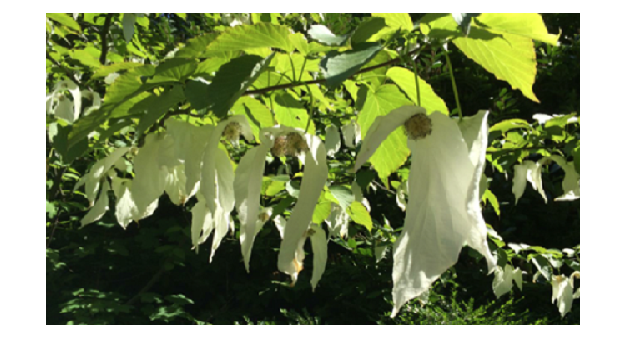 Some years ago The Times used to print a notice every year announcing that a particular tree in Kew Gardens was in flower. Londoners, in enormous numbers, took the tube to Kew each May to see the famous handkerchief tree covered in enormous white flowers, each nearly a foot in diameter – which do indeed look like white handkerchiefs hanging from the branches. With an alternative image in mind, it has also been called the dove tree. When the flowers are disturbed by a light breeze, they give the impression of a flock of white birds gently fluttering their wings.

Over recent years, the University of Leeds has been increasingly adventurous in planting its gardens, both on the central campus and in the outlying halls of residence. Two years ago a young tulip tree outside the Edward Boyle library flowered for the first time. These trees take a long time (fifteen to twenty years) before they begin to flower. This year, a twenty-foot handkerchief tree in the grounds of Oxley Hall (between Bardon Grange and Weetwood Lane) has burst into bloom again. These trees are also slow to flower and it is only the second or third time that this one has produced a show of handkerchiefs. It is nowhere near the size of the famous Kew tree, but it is still an impressive sight.

The branches tend to grow horizontally, and tiers of white handkerchiefs cover the tree. When viewed close up, the flower heads are most unusual. At the centre, there is a ring of purple anthers. These are surrounded by an inch-wide corona of light green petals. The distinctive white “handkerchief” is actually composed of two white bracts (modified leaves, rather than actual petals). They are not the same size – the larger is about seven inches long, and the smaller, usually an inch or so shorter.

Later in the season round, green fruits appear, hanging from short stems. They ripen into hard, purple-brown nuts. Before these can germinate, they have to be frozen twice in successive winters. This is relatively unusual. It is not at all uncommon for seeds to require freezing fruits before they can germinate – but cases which require this on successive winters are rare.

Like the tulip tree, the handkerchief tree is not indigenous to the British Isles. Its discovery in a remote region of China in the nineteenth century and its introduction to Europe read like a Boy’s Own adventure story. The first report came from the French missionary and naturalist, Father Armand David (usually known as Pere David). In 1869 he found a single isolated tree, growing on a mountainside at an altitude of over six thousand feet. He sent dried specimens to Paris in 1871. Ten years later, the Scottish plant hunter, Augustine Henry, found another single tree, in the Yangtse gorge; and sent a specimen to Kew Gardens.

By that time, the fabled handkerchief tree, now called Davidia involucrata, had become the Holy Grail for nurserymen. The most eminent horticulturist in England was Sir Harry Veitch (who was later instrumental in establishing the Chelsea Flower Show). His family nursery in Chelsea was regarded as the foremost in the world. Among the numerous plant collectors he sent across the globe to search for new species was Ernest Wilson who was sent to China to track down Henry’s tree. Henry was the only Westerner who knew its location and he met Wilson in South Yunnan province in 1899 to pinpoint its position on the map. Wilson eventually located the site, but he was horrified to find that the tree had just been felled for timber. It took two more years for Wilson to find another. It was hanging over a precarious cliff edge. However, there was yet more drama to come. When he was returning to England, with his specimens, his boat was wrecked, but he managed to save his preciouss Davidia.

In a strange way, it is very fitting that the search for such an exotic tree should have been so eventful.