Disease-resistant elm to be developed in Sheffield 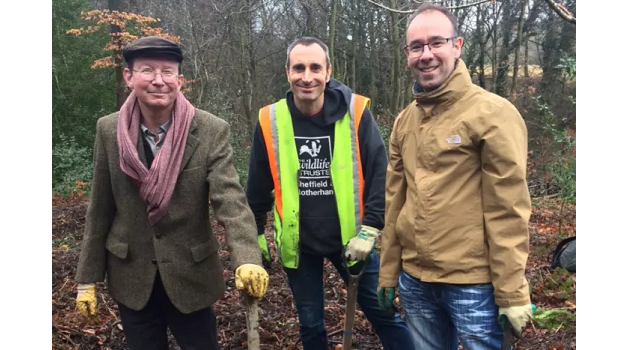 The English elm has gone from being the UK’s most common tree prior to the 1960s to one of the rarest today due to Dutch elm disease, which has wiped out over 60 million trees since its arrival in the UK.

A resident of Sheffield is aiming to start a new initiative which will bring the elm back to the UK, with the help of Sheffield and Rotherham Wildlife Trust. The national project aims to establish eight experimental plantations across the UK, with three saplings of eight varieties of Dutch elm disease-resistant elm trees being planted in Greno Woods.

The first planting took place on Monday 19 February in Greno Woods, an ancient woodland rich in wildlife and full of historic interest.

The project has been started by a crowdfunding campaign and organised by local Sheffield resident and elm enthusiast Paul Selby.

Paul comments: “I have been interested in elm trees since being a child. I remember being very sad to see some wonderful English elms at the bottom of my uncle’s garden die of the terrible Dutch elm disease. In 2014 I made a specific trip to Brighton to see the oldest remaining 400-year-old English elms in the world. And since December 2015 I have led the efforts to save the now famous Chelsea Road elm in Sheffield from the threat of felling by the controversial Streets Ahead programme. European river cruises: the new city break Read MorePromoted by Fred Olsen Cruise Lines

“However, out of the bad can sometimes come some good. Through my work to save the Chelsea Road elm, I met Dr Herling, and together we came up with the idea for the Sheffield branch of the elm initiative. The local response has been wonderful, with nearly £700 raised in just two weeks to fund the project.”

Dr David Herling is the national lead for the project. The work to both protect and bring back the elm in the UK has been his life’s work. He said: “The idea behind the eight experimental plantations is to establish a range of resistant elms across varying climate and soil conditions countrywide, from Exeter to Edinburgh. Above all, we want to make these new trees visible, so that all our potential stakeholders can make up their own minds about which are suitable for wide scale planting.

“The information and evidence gleaned from the eight plantations will then be used to inform the commercialization of the best new clones, so that one day, elms may once again become a familiar tree in the UK landscape. The partnership of the Sheffield community in this has been inspirational.”

The Trust’s Head of Conservation and Land Management, Roy Mosley, who led the efforts to prepare the Greno Woods site for the plantation, said: “This is a really exciting project to be involved with. Elms are an important part of our natural heritage, so we’re really happy to be able to support an initiative to bring resistant elms back by providing a planting site and a commitment to look after them until they’re fully established.”