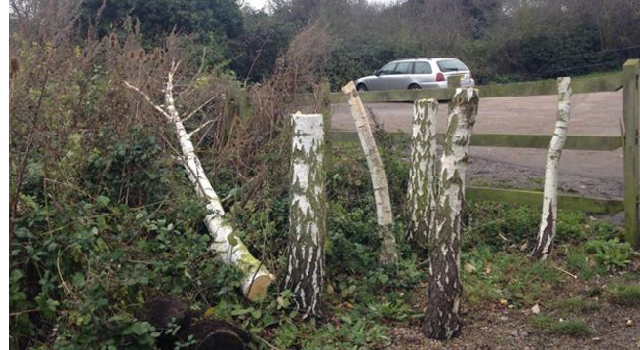 Trees have been hacked down and stripped of their branches to be used for Christmas decorations at Riverside Country Park in Rainham, Kent.

Twelve silver birches at were lopped from their trunks and left on the ground, while their spiky branches were removed.

One fell onto the park’s fencing and smashed it, while others landed in the car park.

It is the second time this has happened, and park ranger Simon Bellinger said he suspected people were making wreaths out of the branches and selling them on.

“Whoever did this didn’t use a chainsaw, it was some kind of hand saw, and I believe are probably dangerous people to approach,” he said.

“They didn’t care about the damage, and potentially harming somebody in the car park. After they cut the trees down, they then stayed around to take off the branches.

“They also don’t know much about trees – this isn’t coppicing or pollarding, the trees were cut off at waist height. And the trunks were not taken away so this was not about somebody needing fire wood.

“We had a similar thing happen last December with some alder trees, which have pretty cones on the ends of the branches.

“It seems people take off the smaller branches and use them to make decorations like Christmas wreaths. If you get them made up professionally, they can cost quite a lot of money.”

Mr Bellinger patched the fence himself and has been hauling the trunks away to be burned as fire wood in the park’s log burner.

He will now have to take down the trees to floor level. But this is proving difficult as there are staff shortages at the park and that work requires a chainsaw, which he is not allowed to use without another person present.

The rangers have put up a notice at the park asking people to come forward if they saw the damage being done. Witness are asked to call the team on 01634 337432 or pop into the visitor centre.

A police spokeswoman said: “We received a report at 4pm on November 28 that trees had been felled in a car park in Motney Hill Road, Rainham.

“The report has been passed to the local PCSO for investigation.”