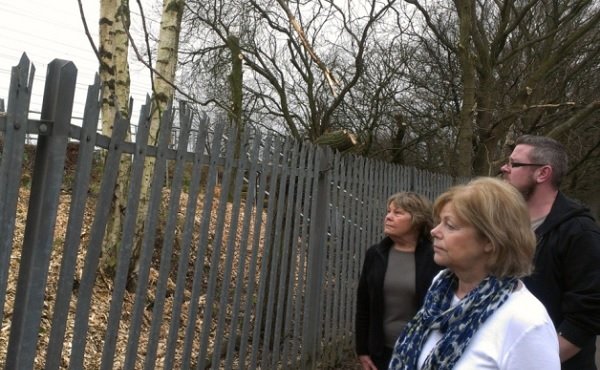 Residents have accused rail bosses of destroying the beauty of a country lane by carrying out a tree cutting programme.

People living on German Lane, Charnock Richard, found themselves in a stand-off with chainsaw-wielding workmen as they attempted to stop the felling.

The work at the spot next to the West Coast Main Line was halted yesterday morning.

But the residents, who claim the cutting is going too far and that trees are being hacked down needlessly, expect it to continue.

Cassandra Wellum, 68, of Parkinson’s Farm, German Lane, said she was reduced to tears.

She said: “They’ve gone down the other side of the land and nuked every single tree. I said, ‘what are you doing?’ They just said, ‘it’s got to be done’. I got upset because in summer this is a beautiful lane.

“That’s when I said every tree in every park will have to be cut down.”

Jack Gerrard, 74, of Assisi Cottage, German Lane, said he had lived in the area all of his life. For 45 years he has lived at his current home next to the line.

“But the wind is a prevailing west wind, and they blow on the road, not the line. We don’t mind them trimming trees at the top of the banking, but not at the bottom.

“To take a whole bank of trees out, which in summer, spring and autumn is something to look at, it’s absolutely not needed.”