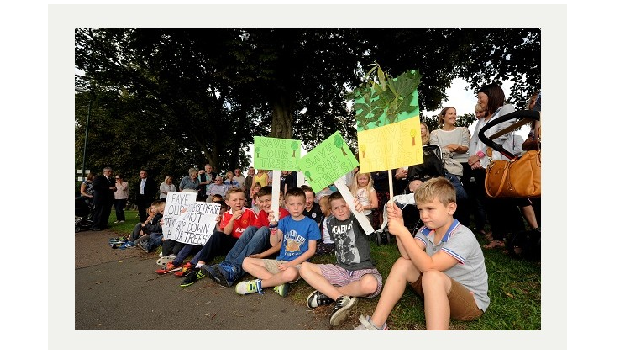 A developer has changed its proposal to remove trees at a village crossroads.

A proposal by Gladman Developments Ltd – which is part of an application to build 165 houses off Barkby Road – originally showed plans to alter Queniborough crossroads by adding a slip road, including removing trees in Rearsby Road.

Leicestershire County Council Highways had recommended this as a way to help traffic flow in the village to cater for the higher volumes of traffic that new houses will bring.

However, Gladman Developments Ltd has now said it does not want to remove the trees and Leicestershire County Council Highways Department has come up with an alternative plan.

The new proposal is still to add a slip road to Queniborough Crossroads, but not remove the trees. Instead, a pavement will be moved and the road will be extended on to parts of a grass area on the other side of the road, where a post box will also have to be removed.

A consultation into the scheme by Charnwood Borough Council runs until tomorrow.

The parish council received the letter about the new plans from Gladman Developments Ltd on the same day as a village meeting where more than 260 people attended to express their opinions.

Queniborough Parish Council vice chairman Margaret Winterton said Gladman Developments Ltd had written to the parish council saying they would prefer not to cut the trees down.

She added that the parish council objected to the felling of the eight trees, but they had not yet met to discuss these new plans.

Talking about the meeting she said: “The school hall was full to capacity. We ran out of chairs. It was an extremely good turn out.

“The residents expressed their anger towards the planning application for more houses in Queniborough and their frustration at the thought of cutting down the eight trees.

“The villagers were asked to write letters to Charnwood Borough Council to express their views.

“We have already had two planning applications approved in Queniborough – 132 houses at Queniborough Lodge and 101 in Millstone Lane. The village is growing rapidly.”

Anne Agger, 73, who lives on Rearsby Road, directly opposite where the proposed changes will take place said she was unhappy that the developers still wanted to go ahead with the slip road.

Anne said her husband had been monitoring the traffic and claimed there was not a traffic problem in the village, so a slip road was unnecessary.

She added that she was also concerned that the tree roots would be damaged when the slip road was built.

Reg Agger, 75, who has been keeping an eye on the traffic, said queues at the crossroads only happened for 20 minutes per day.

“We have one of the most attractive villages in the Charnwood area. Having a main road going through it is not the best. I don’t think there is a need for a slip road.”

Ian Clarke who owns the butchers in the village called Clarkes of Queniborough, and lives in the village, said: “I am against the houses being built – it is a beautiful part of the village and there is no way they should be built there.

“It is a country road in a nice rural village.”

He added that a slip road would not achieve anything.

A Charnwood Borough Council spokesperson said: “We have received a new highways proposal from the developers and Leicestershire County Council has not raised any objections to this.

“The new proposal does not involve the removal of trees and we will now use it when considering the application. Previous proposals will remain on our website for public record but will be marked as being superseded.

“This application is due to be decided by Plans Committee in October or November.”