Queen’s Diamond Jubilee tree is chopped down on Christmas Day 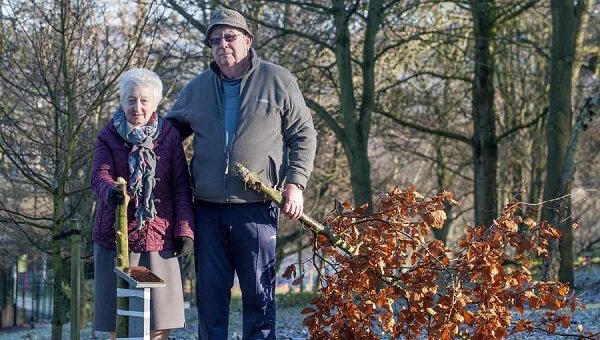 It was planted to honour the Queen during her Diamond Jubilee, but a beech tree was chopped down by vandals – on Christmas Day – the day Her Majesty would address the nation with a message about the important of reconciliation.

Now the chairman of the voluntary group dedicated to preserving the park in the Black Country where the tree stood has spoken of his disgust at the treatment of the tree.

Geoff Johnson, chairman of the Friends of Netherton Park, said he believed two youths had chopped down the tree, which cost £250, on Christmas Day using a ‘sharp implement’ and then dumped the branches in a park bin.

Mr Johnson said: “Somebody has premeditatedly taken something along to chop it down. What amazes us so much is the fact that we paid so much for the trees and on the day that the Queen was getting huge viewing figures for talking to the nation and Commonwealth, somebody goes up there and chops down a tree planted in her honour.”

He added the Jubilee tree had been planted in 2012 along with an Olympic tree to commemorate the London games and both had been targeted by vandals in the past.

Thugs have ripped off plaques from both trees bearing the words ‘planted by the Friends of Netherton Park to commemorate,’ with either the Olympic Games of 2012 or the Diamond Jubilee of Her Majesty added on to the end.

The latest incident was discovered by a friend of Mr Johnson’s wife, who reported finding the Jubilee beech dumped in the bin.

However, he could not say whether the tree and plaques would be replaced as the Friends charity was concerned about the possibility there would be a repeat of the attacks.

A decision on whether to replace the trees will be made at a meeting next Tuesday.

“We are going to think about something to do, but we have to think ‘is it possible that it could be destroyed?'” Mr Johnson said.

He added there was a problem with anti-social behaviour in Netherton park, particularly littering and believed that the incident with the tree was the latest in a cycle of crimes.

He said: “It is feral parents bringing up feral children that is the problem.”