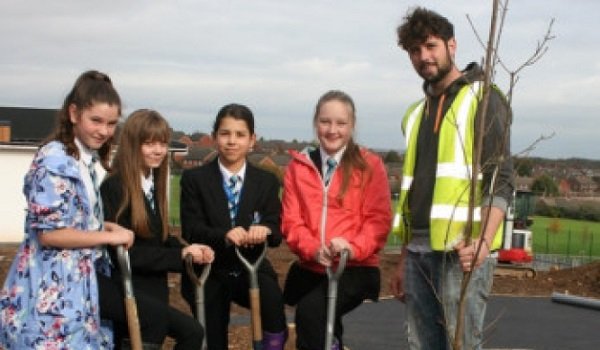 Pupils at Shirebrook Academy are waiting for the first heavy frost of winter so that work can start to plant nearly 400 trees in order to create a brand new wood close to their classrooms.

The school wants to create the woodland to complete the development of its Pine Cone Centre.

The centre stands on the site of the Academy’s old building, which was demolished last year following the school’s move to a purpose-built £27m facility in April. It will be used as a study centre for students attending its new Aspire Sixth Form College and also as a horticulture centre, where pupils from all years will plant, tend, harvest and cook vegetables to learn more about where our food comes from.

But youngsters will have to wait for the final touch which will make the Pine Cone Centre complete – a circle of trees which will surround the buildings to create woodland glade and set the scene for when pupils, including students from the neighbouring Stubbin Wood School, drop by to return to nature.

Made up of native varieties such as silver birch, rowan and ash – as well as red-leaved Japanese maples – the trees, some of which measure up to 6m tall, are currently being grown at a nursery in Retford, Nottinghamshire, but will be relocated to Shirebrook at the first sign of frost, which is the safest time to do so.

Andy Gilbert, vice principal at Shirebrook Academy, said: “It has been very exciting watching the Pine Cone Centre taking shape on the hill above the school and we can’t wait to plant the trees to really set the scene.

“There has been a tremendous amount of input from students, from helping to design the buildings and planting some saplings, and we are sure that they will really reap the benefits from the centre in the coming years.”