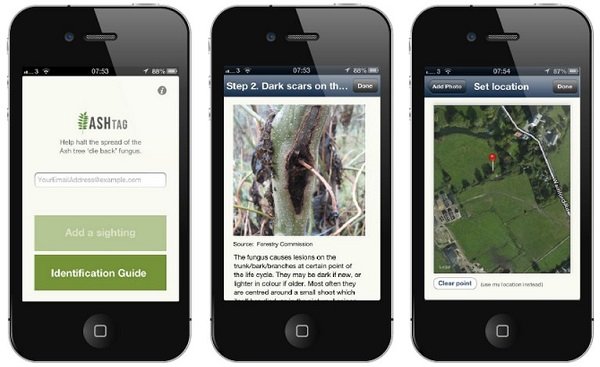 There are an estimated 120 million ash trees in Britain’s woodlands and hedgerows. Evidence from Denmark, where Chalara ash dieback is more prevalent, indicates that approximately 1% of trees show good tolerance to the disease. While tolerant trees may regenerate naturally in some woodlands, identifying tolerant trees is urgently needed so as to ensure a genetically diverse and resilient population for future woodland planting. Identifying tolerant trees and including their progeny in breeding programmes run by the Living Ash Project will enable the large-scale production of resilient trees.

The project is employing citizen science – asking members of the public to help in gathering information – to aid in the identification of tolerant trees. Working with the University of East Anglia’s Adapt group, a new function has been added to AshTag app. By logging into the site at hhtps://www.ashtag.org/sightings/submit, anyone can report on the health of an ash tree, not just this year, but over the next few years.

Gabriel Hemery, Chief Executive at the Sylva Foundation says: “The launch of this survey is a milestone in the development of the project. We will be working closely with AshTag to oversee the online survey and look forward to receiving submissions from members of the public.” He added, “Enabling people to follow the progress of an ash tree is very important, as it will allow us to understand the tolerance of a tree to this devastating disease.”

Chris Blincoe, Programme Manager at the Adapt Group, University of East Anglia says: “The AshTag app was created at a time when the nation’s ash trees were first under threat from ash dieback and the outlook for the species was pretty bleak. Time really was of the essence if we wanted to safeguard our forests and so Adapt has the app up and running just four days after it was confirmed that ash dieback had spread to the UK. Eighteen months on, we are incredibly proud to be in a position to start looking ahead to find a solution to the disease.”

“By asking members of the public across the UK to track the health of their local ash trees, we can tap into a wealth of data which could hold the key to locating tolerant trees and safeguard the future of the UK’s ash trees.”

The Living Ash Project team are most interested in larger trees but any tree can be surveyed. They are particularly keen to survey ash trees in every corner of Britain, because the genetics of ash trees vary across the country. Ideally, the trees selected need to be surveyed every year for at least three years, so that a detailed picture of their health is built up.

People who want to find out more can visit www.livingashproject.org.uk to take the survey and to get free tags to track the health of their tree.