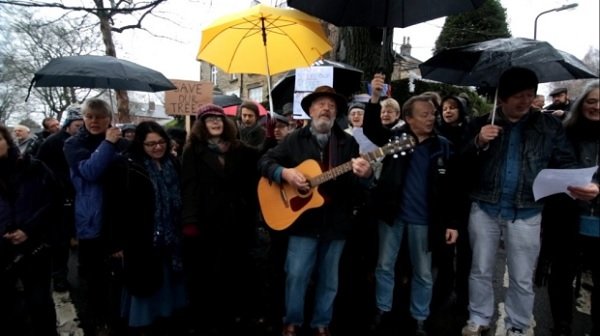 Around 100 people turned out to protest against plans to fell an ‘extremely rare’ Elm tree in Sheffield.

Campaigners gathered at the junction of Chelsea Road and Union Road in Nether Edge at around 10am yesterday in protest against plans to fell the tree there.

Organiser Paul Selby said he was delighted with the turnout – especially as the protest was only organised two days before.
He said: “This Elm is an extremely rare and important tree. It is around 150-200 years old and there are very few Elms of this age left in the United Kingdom.”

Paul said that around 20 million Elms died in the UK in the 1970s owing to Dutch Elm Disease.

He added that there are less than 1,000 Elms of this age left in the UK – outside of Brighton and Edinburgh where special conservation schemes were started – which makes it especially important.

Paul said: “The strength of this protest shows how important this Elm is. There are ways the council can modify the pavement without felling it.”

But there is another reason why the tree is so important.
Paul, a civil servant, said: “Most importantly is that the tree is home to a colony of the rare White Letter Hairstreak butterfly.

“This butterfly exclusively lays it’s eggs on Elm trees, so since Dutch Elm Disease swept through the country in the 1970s, the butterfly has significantly declined.

“As a result our Elm is host to a nationally significant population of this rare butterfly. I attach a picture of the butterfly.”

Bitter protests have sprung up around Sheffield since May opposing plans to axe trees as part of Sheffield Council’s Streets Ahead contract with Amey to upgrade the city streets.
More than 14,000 people have signed a petition calling for an end to the felling.

And the high-profile campaign has attracted support from celebrities, including music star Toddla T, and raised questions about Sheffield’s reputation as a green city.