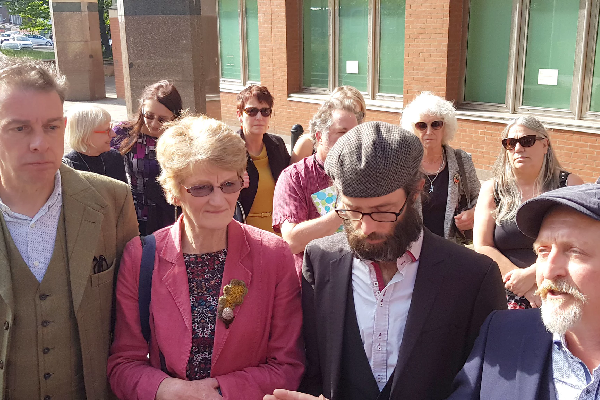 Three tree campaigners have avoided jail after being found in contempt of court for demonstrating against tree-felling work in Sheffield.

Simon Crump, Benoit Benz Compin, and Fran Grace were taken to court by the city’s council as part of a long-running dispute over the city’s plans to fell up to 17,000 trees.

A judge at the high court in Sheffield on Thursday found that the trio had breached an injunction by entering “safety zones” around trees to stop them being chopped down.

The judge, Mr Justice Males, gave both Crump and Compin a two-month jail sentence, suspended for one year. He decided no further punishment was appropriate for Grace.

Males said he would reserve judgment on a fourth defendant, Paul Brooke, as he said there were further legal issues to consider.

The controversial tree-felling programme was paused in March following a fresh series of confrontations earlier this year, which entailed the deployment of dozens of police and arrests of protesters.

In August the city council obtained an injunction to stop protesters taking direct action against the felling of trees as part of a £2.2bn PFI deal to maintain Sheffield’s roads and pavements.

The council said its outsourcing company, Amey, removed trees only if they were “dangerous, dying, diseased, dead, damaging or discriminatory” (the last meaning they could damage pavements and potentially obstruct disabled residents).

But protesters accuse Amey of chopping down healthy trees for the reason that they were more costly and difficult to maintain than young saplings. The environment minister, Michael Gove, has described the programme as “bonkers”.

This week Males pushed the council’s legal team to confirm explicitly that the case was being brought with the blessing of Sheffield city council leader, Julie Dore, who has only rarely spoken publicly about the dispute.

After a short adjournment, Yaaser Vanderman, the council’s barrister, said he had been assured that Dore “positively agreed that proceedings should be brought”.

Last year another protester, Calvin Payne, was found to have breached an injunction not to enter a “safety zone” around trees earmarked for the chop, and to have incited others on Facebook to follow his lead. He was given a suspended sentence and told to pay the council’s £16,000 legal costs, after the local authority instructed a prominent QC for a one-day hearing.

Local celebrities, including Jarvis Cocker, helped crowdfund the legal fees for Payne and another protester who was handed an £11,000 bill for spending 10 minutes in a tree safety zone.