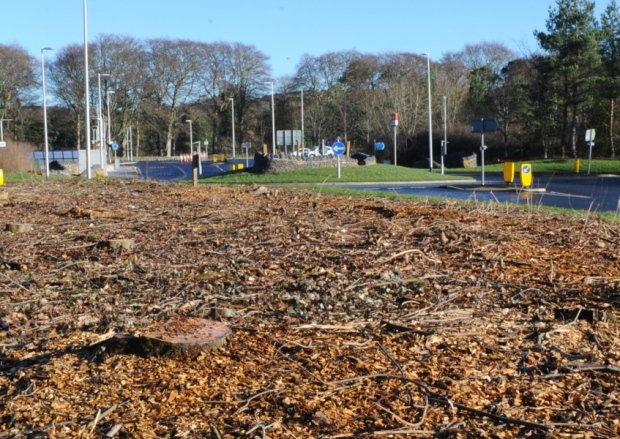 The chairman of Scottish Borders Council’s planning committee, Councillor Ron Smith, will welcome the opportunity to defend a tree cull at a proposed visitor centre at Tweedbank, the Southern Reporter has reported.

The 150 protected trees which were felled on the site of the proposed visitor centre for the Great Tapestry of Scotland at Tweedbank will not be replanted – even if the £6 million project does not go ahead.

Councillor Ron Smith said: “Tree removal does not constitute a commencement of development.”

He stressed that the council was entitled to give permission for the felling of the trees covered by a Tree Protection Order (TPO).

Progress on construction of the centre, due to open next year, has been delayed pending the Scottish Government carrying out a “due diligence” exercise on the business case before confirming a £2.5 million contribution, with SBC having already agreed to fund the £3.5 million balance.

Mr Smith was questioned about the SBC-owned site – just west of Eildon Mill and across the road from the new rail terminal – by Conservative opposition councillor Sandy Scott (Jedburgh and District).

Mr Scott asked: “What are the council’s proposals for replanting the 150-plus trees which were subject to a TPO and which have never been felled?”

Mr Smith said he welcomed the enquiry, especially as the issue had elicited comment in local newspapers.

He referred Mr Scott to an arboricultural assessment which examined the 314 individual trees at the site and which helped inform the decision of his planning committee, in October last year, to grant consent for the new building.

He said that independent study, which recommended the removal of over 150 trees, had stated: “Little post-planting management of the trees appears to have been undertaken with the result that many of the younger trees have become very narrow and drawn due to mutual competition for light.”

It was this situation, said Mr Smith, which had been addressed by the felling.

He said: “The decision [to remove the trees] had regard to their poor condition and lack of effective management of the wooded area.” There are no proposals to replant … the planning authority is entitled to give permission for the felling of trees covered by a TPO.”

He offered an assurance that the visitor centre development could only commence once a detailed landscape plan, which would include a woodland management scheme, and a tree protection plan for the remaining trees had been submitted and agreed.

“Neither of these conditions has to be agreed at this stage as development has not commenced,” said Mr Smith.

Image courtesy of The Southern Reporter