Prosecutions urged after trees axed between Sherborne and Yeovil 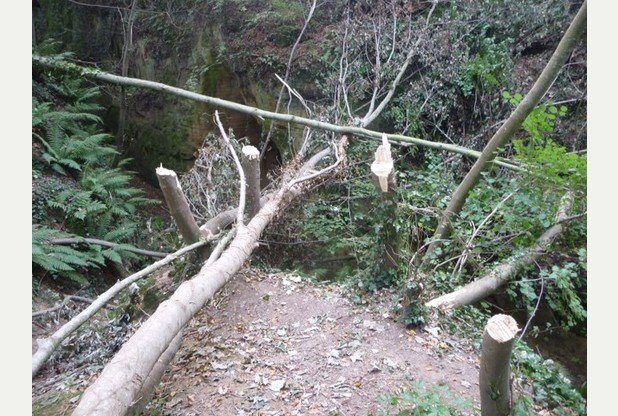 Residents have been left shocked by damage caused to common land between Sherborne and Yeovil.

Police are investigating the incident at Bradford Hollow, near Babylon Hill which saw several trees cut down and pushed into a small valley.

Bradford Abbas resident Andrew Marsh said: “We were appalled to find a large number of trees have been felled with an axe. Some of these are straddling the hollow and others have fallen into the hollow, clearly a safety issue for walkers underneath.”

Chairman of the parish council Derek Hayward said: “Some of the trees had a trunk diameter of up to nine inches or so. The reason for this vandalism is not clear and it is a mess.”

West Dorset district councillor Robin Legg said: “Apart from this vandalism being criminal damage, I believe that since the area is designated as a Sites of Special Scientific Interest, the damage would also be a specific crime under the Wildlife and Countryside Act of 1981. I would urge the prosecuting authority to investigate and take action against this shocking level of destruction.”

A spokeswoman for Dorset Police confirmed to the Western Gazette that an investigation is currently underway.

Bradford Hollow is a popular area used by hikers and dog walkers.

Residents have also raised concerns that the area has recently been used as an “off-road playground” by BMX riders, mountain bikers and motorcycle riders.

Dorset County Council said the site should not be used in this way and it plans to level the land in the hollow to make it less exciting for off-road vehicles. The authority also said it is exploring the option of covering the area in a layer of millings – recycled asphalt left over from road works – as this worked as a deterrent at a similar site in Leigh.