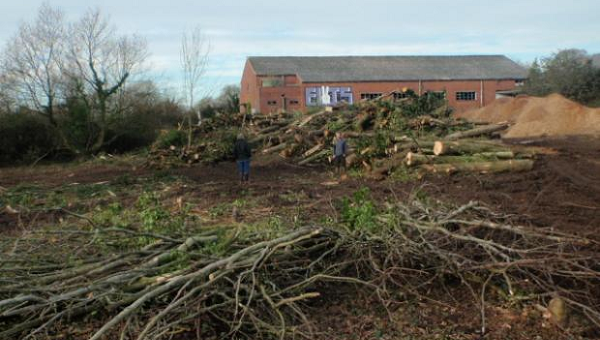 A 70-year-old Shirenewton property developer has been ordered to pay over £24,000 after he chopped down more than 200 trees without a licence.

Paul Bailey, of Shirenewton Hall, did not turn up to his sentencing at Newport Magistrates Court yesterday but the judge fined him £22,000 in his absence – the maximum fine he could give.

But he did not have planning permission to redevelop the land at the Old Theatre Site north of the A48 at Caerwent.

Director of Thomas Brothers Nash, Paul Thomas, had pleaded guilty to felling the trees and the company was fined £10,000 on August 7.

Yesterday it was Bailey’s turn to be sentenced.

He was prosecuted by Natural Resources Wales and charged with felling growing timber without a licence issued by the appropriate forestry authority.

He had been found guilty in his absence at a hearing at Newport Magistrates Court on August 7 when he failed to turn up.

People are allowed to fell trees without a licence providing the timber amounts to around five cubic metres but the amount felled under Bailey’s instruction was more than 25 times the size at 109 cubic metres.

District Judge Martin Brown said the court had received a letter from Bailey’s solicitors claiming Bailey was unaware a licence was needed.

Judge Brown said: “This man is a company director of many many companies, many being associated with the building industry and he claims he doesn’t know he can’t fell trees without a licence.

“[The letter] suggests Mr Bailey was not aware he was committing an unlawful act and did not know you had to have a licence. I find that very difficult to believe given his position.”

Judge Brown said it seemed likely Bailey felled the trees ahead of plans to build on the site “unless he’s got a severe case of hay fever and can’t be around trees”.

Judge Brown fined Bailey £22,000, double the value of the trees. The letter from Bailey’s solicitor said he is in a position to pay the fine.

Mohammed Yakub, prosecuting on behalf of Natural Resources Wales, said: “It will take years and years to restock those trees”.