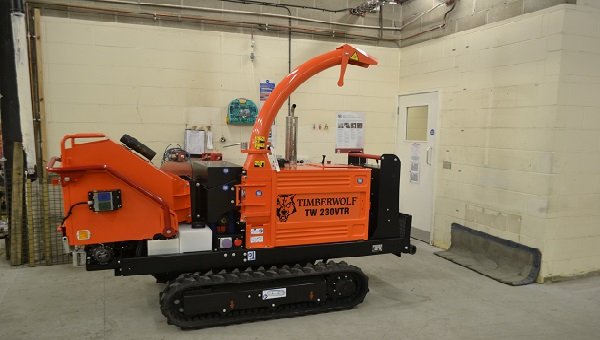 UK Chipper manufacturer Timberwolf celebrates its 30th anniversary this month. Joe Wilkinson recently caught up with Richard Marshall, an original family member to discuss the past, present and future of the company.

‘Timberwolf started off as a family business,’ Richard explains.  ‘My father is the founder and he invented our first chipper. My mother was the bookkeeper and i used to sell the chippers. Dad built it, i sold it and Mum counted it. That was the basic principles of the business.’

Timberwolf chippers have always been made in the UK. Everything is designed in house, using as much local engineering as possible before importing a few parts. The parts that aren’t British are the engine, the tyres and the hydraulic motors, the more specialist parts. All the fabrication occurs in the UK.

The very first prototype machine was built in 1985 and that evolved into the machines that were first sold by Richard in 1986. ‘That’s the date that we count as the forming of the company so to speak. The prototype was an experiment to see if we could make what we felt the market required at the time.’

Back in 1986, chippers were quite a rare commodity in the country. There were some machines from America about the size of a transit van and a few little garden machines around. According to Richard, most tree surgeons at the time couldn’t afford to run the big machines, and if they could afford to run it, they couldn’t afford to tow it because it weighed two tonnes! ‘We were very much looking into a niche side of the market place where we were trying to make a compact chipper that could deal with material up to 4 inches in diameter. That was the whole idea behind the first machines.’ He explains.

Timberwolf originally started fabricating a 4 inch machine because of the price of fuel. ‘Basically for tree surgeons at that time, anything they took down over 4 inches became firewood’ says Richard. ‘Firewood was valuable and anything below that was rubbish and it was troublesome to get rid of.’

Trucks have also changed a lot since the 80s. Tree surgeons didn’t have big trucks to put things in so a lot of the time they were putting brushwood onto the truck, cutting it with a chainsaw and stomping on it, which was not very safety-conscious in that regard. ‘A chipper saved them time, so we were trying to make small machines that were affordable for an up and coming tree surgeon. Over time we were making 4 different gravity machines all doing the same sort of size, all approaching it from a slightly different angle. We basically kept the customer for between 3 and 5 years before they outgrew the machine.’

In 1995 Timberwolf made its first hydraulic chipper, the Chip It 30DH. Richard explains, ‘we weren’t the first manufacturer to make a six inch chipper. The chipper market had developed and we were probably one of the last companies to enter the 6 inch hydraulic feed chipper market. We really hit a sweet spot. The machine was the right size, had great performance for its day and it was at the right price. It was a twin feed roller, it weighed about 800kg, which was quite light at the time, it was a compact machine and it had a bit of a wow factor to it. Back then, the vast majority were single feed roller machines at that price for a 6 inch chipper. We were offering them a water-cooled diesel engine, which all machines have got now, but that was probably the second chipper had the Kubota 1205 engine fitted.’

The inspiration for the original machines came from a customer at Richard’s father’s garden machinery business. ‘Since the 60’s my father was running a garden machinery business doing a wide variety of equipment and it was one customer that came to us that had a particular problem. They wanted a chipper that could fit on a little trailer and they had to carry all this kit around with them and they had no room for a chipper whatsoever. That’s where the dimensions came from. The customer showed us the room he had on his trailer, told us he needed a chipper with a 4 inch capacity.’ At this point, the customer agreed to buy the prototypes, gave feedback and it evolved into a more familiar and finished machine.

The company, originally based in Kent and originally known as Entec, moved to Suffolk in 1991 due to the industrial skills available in the county. ‘We turned up to an old pig shed and we were looking for a place with room. The building was 4,200 square feet and as there were only three of us in the company, we had a massive amount of space. Moving from Kent to Suffolk was a big deal for us. There was a lot of skilled engineering around here, and from that old industry there are little pockets of specialist engineering companies. Suffolk was a great engineering hub, and it had a lot more space. The Midlands would’ve also been good but it was dominated by the car industry so for us it didn’t make sense for us to go there.’

‘We ran Entec as the main company with the woodpecker logo up until we created our dealer network,’ Richard explains.

By 1999, the machines were becoming popular. ‘When you sell direct to the end user, you can get to about 350 people a year. You can look after those people and keep them happy. Once you get beyond that, it becomes very difficult to control that from one location. To keep up with things, we needed to have a dealer network.’

The route to market used to be a lot different for Richard back then. ‘I used to make a phone call, talk to people and work out what their problems were. They would describe their problem and my job was to make sure they gave me an accurate description. I would then match one of my machines to that problem’ he explains.  ‘I would persuade them to have a demo, go out in a camper van with a trailer. I’d fit as many chippers as i can on the trailer. I’d go round the country and ideally come back with an empty trailer.’

Timberwolf now has a nationwide coverage of 15 dealers across 41 depots and 64 trained engineers. 80% of people in the UK can drive to a Timberwolf dealer within 1 hour. ‘The dealers are factory trained by us,’ says Richard. ‘They are certificated and often come back for refresher courses. Richard bought his parents out in 2006 and now solely runs the company.

Presently Timberwolf has now produced almost 11,000 machines. ‘The first machine was sold in 1986, it wasn’t until 1998 that we sold our 1000th machine. Ever since then we’ve gone up and up. The production is now geared so that we can produce 1000 machines a year.’

There is no slowing though for the Suffolk based company. ‘30 is quite a milestone for us. It makes me appreciate that I’ve got old without realising’ says Richard. ‘Our next ambition is to double our size and output in the next 5 years.’

This sounds ambitious. Here’s to the next thirty years at Timberwolf.