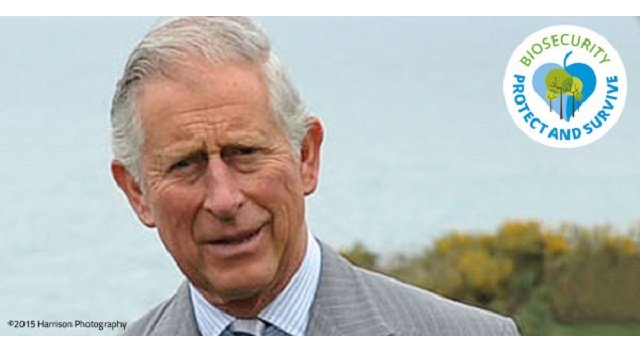 The Arboricultural Association is thrilled to be able to announce that the opening address for the 51st National Amenity Conference ‘Biosecurity: Protect & Survive’ will be presented by His Royal Highness Prince Charles. The event will kick off on Monday 11 September with a message from the Prince of Wales, who has always been a prominent promoter of the natural environment and has a keen understanding of the significance of biosecurity.

The 51st edition of the Associations Annual Conference titled ‘Biosecurity: Protect & Survive’ will deliver cutting edge research, insightful opinions and the opportunity for debate, engagement and learning from some of the world’s leading authorities.

Prince Charles recently told Gardeners’ Question Time that he plants trees at Highgrove with his grandson Prince George, hoping to encourage an interest in horticulture by showing him how much they have grown each time he visits.

Trees need careful management over generations particularly with the threat from pests and diseases, and the Prince is keen to raise awareness. He was honoured to be offered the chance to address delegates from the professional tree care industry, who’s work he said was vital in monitoring and keep threats to this valuable national asset at bay.

Biosecurity, the subject of the Conference, is a major focus for the Association and in July they organised a meeting with parliamentarians. This allowed the industry to forcefully put forward a point that is less acknowledged in policy circles: that planting trees in towns and cities counts for little without funding for their ongoing care and maintenance, which is under increasing threat.

In a recent response to Michael Gove’s recent speech, in which he pledged to provide more “support for woodland creation and tree planting as we seek to meet our aim of 11 million more trees”, The Association stated that: “The planting of new trees is just a small step and a stronger management policy for trees needs to be put in place, planning for their lifespan, not just ours.”

“There is a distinct lack of attention paid to issues other than simply planting a tree, including species selection, environmental and other factors like surface materials. Mortality rates of 30-50% are still commonplace during the first year after planting urban trees. This is clear evidence of the need for more consideration of a post-planting tree-management strategy and consultation of tree-care professionals.”