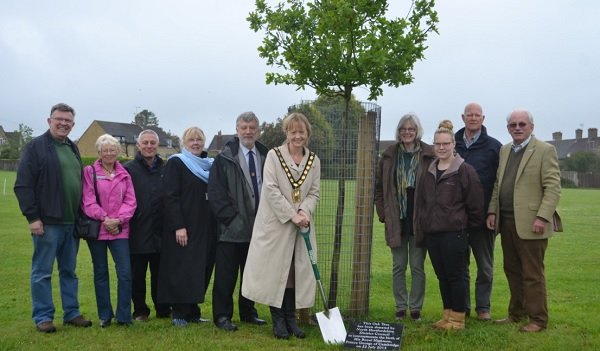 An oak tree with an engraved commemorative plaque to mark the birth of Prince George was unveiled at a special ceremony in Whitwell Recreation Ground yesterday (Wednesday May 28).

The tree and granite plaque were donated by North Herts Council (NHDC) to St Paul’s Walden Parish Council to officially honour the birth of the first child of the Duke of Cambridge and Duchess of Cambridge last July. The commemorative tree at St Paul’s Walden is the fifth such oak tree to be planted in North Herts, one for each Area Committee area.

Cllr Linda Anderson, vice chair of St Paul’s Walden Parish Council, said: “We are delighted that the people who live in St Paul’s Walden are able to mark the birth of the third Prince in line to the throne in this way.

“Our parish community has an extra special connection with the royal family because the late Queen Mother was baptised in All Saints Church in St Paul’s Walden and it is rumoured that the parish was also her birthplace. To be able to commemorate the birth of her great, great grandson is an honour and a privilege.”

Cllr Gray added: “The birth of the Royal baby was such an uplifting moment for the UK and we are thrilled to be able to pay our own special tributes across North Herts.”