Gristwood and Toms preparing for storms 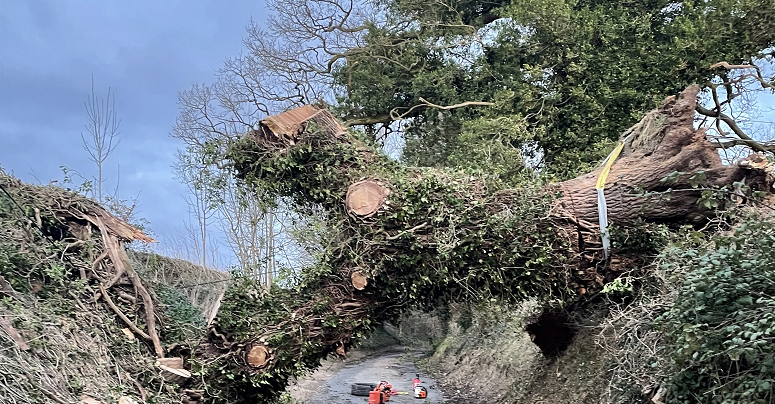 During the Great Storm in 1987, 18 people lost their lives in Britain, and damage costs were estimated at over £1bn. Thousands of homes and businesses were left without power for several days, wreckage blocked the roads and railways, and more than fifteen million trees were lost.

Director and co-founder of tree contractors Gristwood and Toms, Dave Gristwood, said: “We were less prepared for the storm in 1987, and as a business we were less coordinated.”

“Back then our sole source of communication was the landline telephone so if we were called out on an emergency, we’d have to get back to the office to pick up the next call out. It was only when we had a backlog of work that we could plan our routes and avoid having to keep returning to the office. In some ways that event helped us as we had to take on more staff to cope and we managed to hold on to them, which in turn helped us to grow the business. By the time the next big storm hit us in 1991 we were a bigger company and more prepared.”

Does that mean, in comparison to 1987, this year’s storms have been easier to deal with? “Not at all” says Dave. “We now serve a much bigger area and the damage to trees and property is widespread. We’ve had to deal with nearly five hundred call outs in the last week and they’re still coming in.”

The difference now is how Gristwood and Toms deals with them. Calls come in and tasks are prioritised. “Blocked highways are first, then property damage, and finally parks – where the risk to people is reduced as parks can be closed until damage is assessed.”

Gristwood and Toms have teams working within all the boroughs they serve so they can deal with emergency calls quickly. Where the amount of work is excessive, they bring in additional teams to help. The order is to make the area safe and then move on to the next job. The clean-up operation, where teams return to remove all debris and make good the site, can last for several weeks.

The physical work remains the same, but technology now plays a major part. The company has developed their own computerised Management System where jobs are issued to each team electronically on hand-held tablets, team progress is tracked in real time and all completed work is photographed. The tablets also contain Health & Safety assessment forms and Vehicle Defect forms to reduce admin, save time and eliminate paper waste.

Despite all this technology, it has taken a concerted effort to cope with the volume of emergency work and it has been all hands to the deck. Staff who would not normally get involved with emergency call outs: tree planting teams, office managers, trainees, workshop staff and apprentices; all who are qualified to do so have mucked in, volunteering to join the tree gangs to assist with the clear up. Many worked through the weekend to help clear the backlog. Gristwood and Toms are lucky to have such resolute staff.

Whether these recent storms will prove to be as devastating as the Great Storm of 1987 remains to be seen but for Dave Gristwood one thing is clear. It is the weaker trees that are most likely to fall. “My recollection of the trees that were felled by the storm in ’87 is that a large number of them were rotten and dry. The healthy trees fared much better.”

This observation is valid. With the effects of climate change, we must accept that extreme weather events will become more commonplace. Tree damage and tree loss is inevitable but in areas where trees are cared for through a proper tree maintenance regime the damage will be less severe.