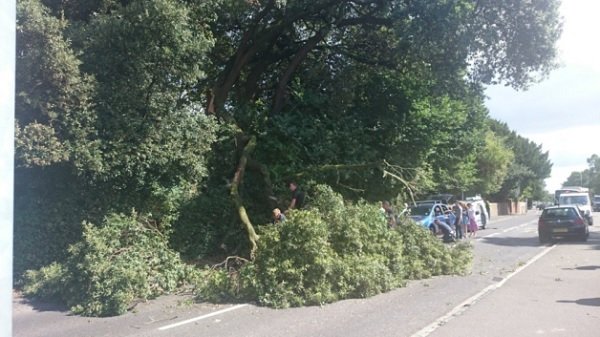 A mum has told how she and her children are lucky to be alive after part of an oak tree bigger than a house crashed onto a road metres away from them.

Rachael Green (pictured) said that she, Hayden, two, and four-month-old Scarlett were metres away from being crushed by thick branches that snapped off a tree in Havant Road, Farlington, Portsmouth.
The drama unfolded as Miss Green, 24, walked her family, with Scarlett in a pushchair, from their home in Rectory Avenue to the post office.

Speaking of her ordeal, she said: ‘We were on the same side of the road as the tree was.

‘But we crossed to the other side because the pavement was bigger, and as I passed the bus stop I heard cracking sounds.

‘I looked up and thought it was the birds in the trees, but then it got louder and the branches came down.

‘That’s when I started to run and fortunately the branches missed us.

‘I was really shocked by it and felt sick afterwards.

‘I got out of the way in time, but if we hadn’t have crossed the road then we would have got crushed.

The incident opposite Farlington Dental Practice happened at about 11.10am yesterday. Huge branches were left littering the road and were cleared up by residents.

Traffic ground to a halt while the clean-up operation took place. Police were also called to the scene.

The tree belongs to a house off the road and its owners Sean and Sam Powles had just arrived home from a holiday when they heard the branches come crashing down.

Mr Powles, 43, said: ‘I was sitting in the house when I heard it come down.

‘We have had the council around about this tree since 2009; we have got massive concerns with it.

‘It could have fallen on anyone. How it didn’t land on anyone is beyond me.

‘If I had my way I would cut it right back.’

He said that part of the tree had crashed down on their garden before.

An expert is now set to assess the tree, which is subject to a preservation order, meaning no work can be done on it without permission from the city council.

Simon Green, owner of Pearl of the Orient, was approaching Havant Road from Gillman Road when he came across the tree in the road.