Police search for vandals who smashed down trees at Memorial Park 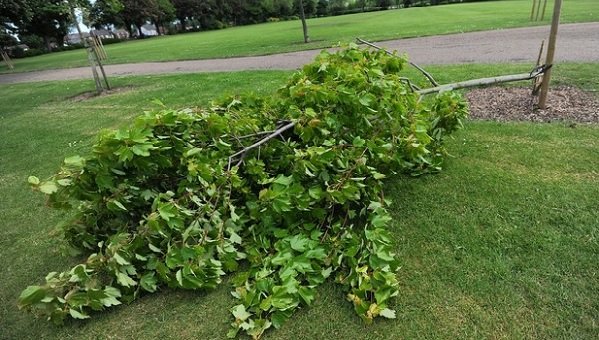 Police are appealing for information after sapling trees in a park were smashed apart by vandals.

As a result of the incident, another CCTV camera is being installed at Maurice Lea Memorial Park, in Church Gresley, as the crime took place out of range of the current camera.

The incident is believed to have happened on Saturday night and joggers taking part in the Park Run were the first to notice the damage to the trees on Sunday morning.

Derbyshire Police contacted the memorial park’s parklife officer to establish whether high winds could have caused the damage, but they concluded that it could only have been done deliberately.

Swadlincote resident Paul Humphries was one of the first people to notice the damage when he went up to the park in York Road with his 10-year-old son Matthew for the Park Run event.

The 47-year-old sales manager said: “We were walking along the path and I saw the first one, but as we walked along there were about nine or 10 trees which had been snapped and the tops were missing.

“I feel more for the people who maintain the park. It’s a lovely park and always such a pleasure to go there.

A South Derbyshire District Council spokesman explained that although the park was being monitored by a camera at the time the vandalism occurred, it took place outside of its filming range.

He said: “An extra camera is due to be installed this afternoon to increase coverage as we continue to work closely with both our safer communities team and the police – who are looking at increasing patrols around the park on Friday and Saturday evenings – to reduce the chances of it happening again.

“We are looking at replacing the damaged trees in the autumn and are determined not to let a small minority detract from people’s enjoyment of South Derbyshire’s attractive public spaces.”

Anyone with any information about the damage should call police on 101.
source