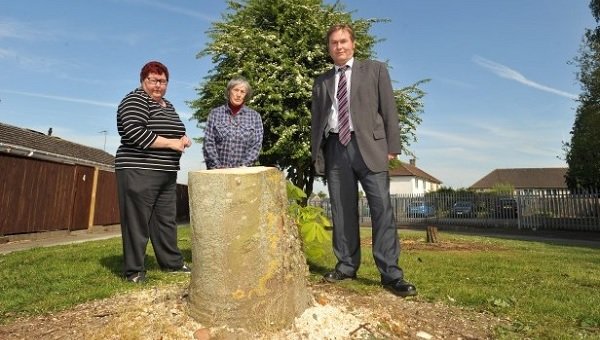 The horse chestnut and hawthorn trees were axed without permission leaving two stumps behind.

It is not known who cut the trees down on the green outside bungalows in Montrose Road South, Aylestone.

Lorraine Fuller, 69, who lives nearby, said: “It is pure sacrilege. They’re beautiful trees. I was just so angered and so was my neighbour. It is disgusting.

“I came home the other day and saw these guys hacking at the trees.

“These trees were causing no-one any harm – they were not blocking any light. They were absolutely beautiful, it is such a shame.

“Someone needs to pay for new trees, we need them.”

Lorraine said she would pin herself to the one remaining tree to protect it.

Resident Zelda Rubinstein, 81, said she was also upset the trees had gone.

She said: “They were completely vandalised. We all had to witness this awful thing happening. It was one of the saddest sights I have seen.

“The trees were doing no harm. They were lovely, really nice, all they needed was a bit of pruning.

“The big one was a horse chestnut. It was a nice shape and gave shade. It was also there for wildlife.”

She contacted the council but said: “Leicester City Council did not know anything about it.”

Aylestone’s Liberal Democrat councillor Nigel Porter said: “It’s absolutely bizarre that people are cutting down council owned trees without authentication. I would like to know what is going on.

“It is very odd. I have never heard of anything like this before.

“I think these trees were really valued.

“We can see if we can get some funding to get them replaced.”

The city council confirmed that it did not fell the trees.

A city council spokeswoman said: “A horse chestnut tree and a mature hawthorn on Montrose Road South were unlawfully felled.

“The matter has been reported to the police.”

A police spokeswoman said: “Officers are investigating circumstances around two trees that have been cut down on Montrose Road South.

“It is believed to have happened on Tuesday, May 12 on a grass verge owned by Leicester City Council.”