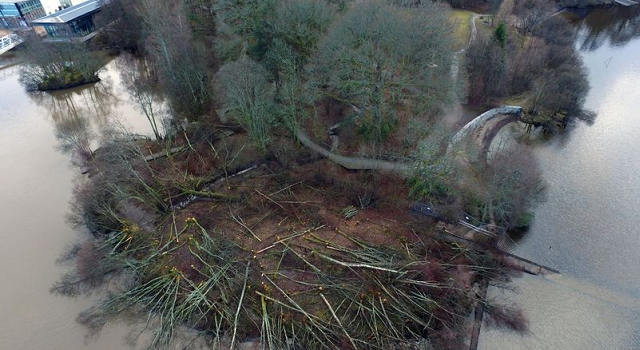 Officers leading the probe have confirmed that they are chasing a lead, stating: “There is a positive line of enquiry. However it is still ongoing at the moment.”

The larger portion of the land is owned by the national park, with a smaller section being owned by the Flamingo Land development company.

There has been a proposed development of a £30million resort by the leisure company at West Riverside, seeking planning permission in principle later this month.

A new venue is set to open this month, near the site where the trees were felled.

There has been a new Tree Preservation Order put in place by the national park authority covering woodland between Lock Lomond Shores and Cameron House.

Gordon Watson, chief executive of Loch Lomond and The Trossachs National Park, said this week he is hopeful that the living tree stumps will show new growth soon.

He said: “The Tree Preservation Order which covers both the felled area and wider woodland areas will help ensure there is added statutory protection while the area regenerates.

“We will be managing the site under our responsibility to ensure it recovers as a woodland area as quickly as possible and we would expect initial growth from the living remnant tree stumps to be already visible following the coming growing season.”

In a previous statement, the park said the felling has had a “significant negative impact” on the setting of Drumkinnon Bay and Loch Lomond Shores.