Police investigate violent clashes and the cause of ill workers 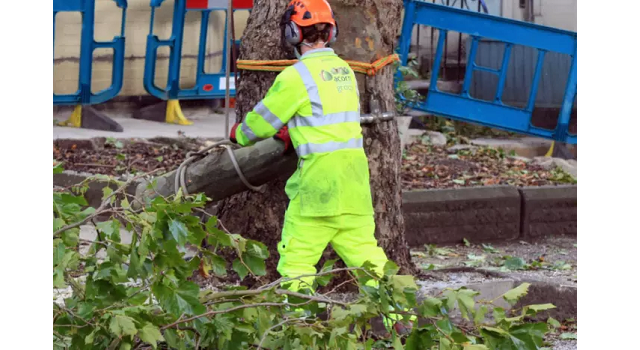 Council contractor Amey have temporarily ceased work in Sheffield to re-evaluate the safety of its stewards amid claims of violent clashes.

Police have begun investigations after both campaigners and worked claimed they had been assaulted.

Amey have previously stated that they would physically remove anyone who entered the safety zones set up around the trees that are being felled.

Tree-felling has been paused in the wake of violent clashes between workers and protesters in Sheffield.

Council contractor Amey said work at Meersbrook Park Road would be paused for a “few days” to re-evaluate the safety of its stewards.

Police are investigating after both campaigners and workers claimed they had been assaulted on Monday.

The firm is removing damaged trees as part of a £2bn scheme but campaigners say some of them are healthy.

The latest clashes come after Amey said it would physically remove anyone if they entered safety zones set up around the trees being felled.

Darren Butt, the Amey account director, said: “I need to make sure that I can reassure my own team of their safety on site.

“I hope to be back removing trees and carrying out essential work on the highways very shortly.”

A member of the Sheffield Tree Action Group, Dave Dilner, believes that Darren Butt was being “disingenuous”. He stated: “No campaigner has ever threatened or assaulted any member of his staff, if they had they would’ve been arrested and they haven’t,” he said.

My Dilner continued: “No campaigner has ever threatened or assaulted any member of his staff, if they had they would’ve been arrested and they haven’t,”

Police have also started investigations into what caused workers to fall ill after being given tea by residents whilst felling the Sheffield trees.

The contractors became “violently sick” after drinking a tea provided by a resident whilst working in the Meersbrook area in October.

South Yorkshire Police confirmed it was investigating: “reports of three alleged assaults on three workers who were felling trees in Sheffield”.

A source, who did not want to be named, said: “I spoke to one worker who said he had a cup of tea during his shift, finished work but then became violently sick.

“He took the next day off work and then discovered his two colleagues had similar symptoms.

“The worker said they felt they had been given something because the symptoms were so similar and severe so they reported it to the police.

A South Yorkshire spokeswoman said: “South Yorkshire Police are investigating reports of three alleged assaults on three workers who were felling trees in Sheffield – this matter was reported during October 2017.

“Officers have carried out forensic tests and have spoken to a number of witnesses regarding this matter and enquiries are ongoing.”