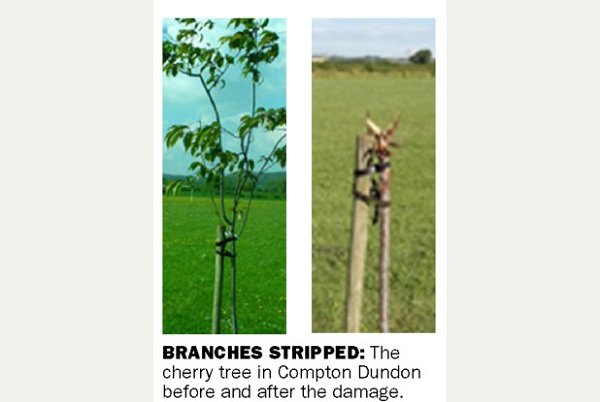 Police are appealing for witnesses after a cherry tree planted in Compton Dundon in honour of the birth of Prince George had its branches stripped off.

The young tree was planted at the sports ground at the Meadway Hall in March by the Compton Dundon and Littleton Women’s Institute to commemorate the royal birth last July.

It was found severely damaged on the afternoon of Sunday, July 6 by villager Royston Maddaford, who tends to the flower boxes in front at the hall.

Former president of the WI’s committee Angela Castle said: “We were all very shocked at the WI and held a meeting to tell the members what had happened.

“Royston found the tree in a bad way on Sunday – it’s branches had been stripped and they were scattered all around. We don’t understand why someone would do this – it just seems to be completely mindless.

“Our cherry tree was growing well and had a good number of leaves. Now we don’t know if it can survive the damage done. I suppose we will have to start the process again next spring if it doesn’t survive.”

A police spokesman said: “We received a call reporting criminal damage to a cherry tree in Compton Dundon and we are hoping to hear from anyone who can help with our enquiries.

“It is unknown at this time whether the tree will be able to survive. The incident took place sometime on Saturday, July 5 or Sunday, July 6. We would like to hear from anyone who saw anything suspicious in the area during the weekend.”

Mrs Castle said she believed the damage was done on Sunday as she has heard reports that it was seen undamaged on Saturday night. Anyone with information should call police on 101 quoting crime reference number 69140-14.