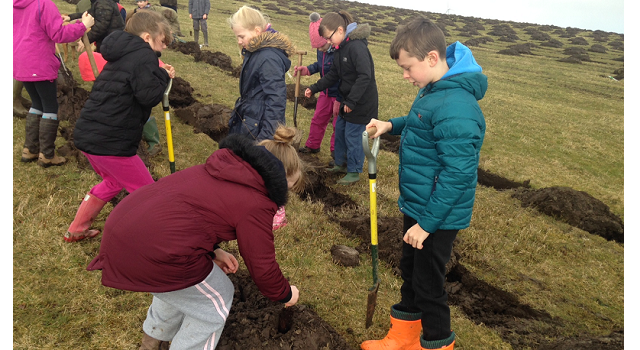 Schoolchildren planted the first of 660,000 trees in England’s largest forest for more than 30 years on Friday 23rd March.

Pupils from Wooler Middle School will help to begin the creation of the forest at Doddington North Moor, Northumberland.

The new forest will provide real benefits to the North-East economy – short and long-term employment on site and a future timber supply to wood processors, including A&J Scott, which employs almost 150 people in nearby Wooperton. The trees to be planted at the site have been provided by regional nurseries – Cheviot Trees near Berwick-upon-Tweed and Trees Please in Corbridge.

Environmental benefits include the restoration of a rare peat mire on the site and the extension of a red squirrel buffer zone.

Project manager Andy Howard has been delighted by the level of public support for the scheme, which will create new mountain bike trails, opportunities for forest education and improved access to a bouldering site.

Around 65,000 trees will be planted by the end of April, with the rest following over the next two winter tree planting seasons. Planting could not start earlier because Doddington was only approved on 30th November 2017 and major preparation work, including clearing vegetation, putting up deer fences and mounding, had to be carried out – and was delayed by the Beast from the East.

Planting teams from The Forestry Workers’ Co-Operative, in Pathhead, southern Scotland, will start work immediately after Friday’s ceremony. The trees planted in the coming weeks will be mainly Sitka spruce, but also oak, birch, alder, Western red cedar and Noble fir. Next winter, the planting will be a mixture of Sitka spruce, Scots pine, birch, aspen, oak and alder.

Andy Howard said: “As the children prepare to get the tree planting under way, I reflect upon how our actions can create a legacy for them. I hope Doddington can be a blueprint to help develop the resources future generations will need, and to restore and maintain some of the biodiversity that mankind’s actions might otherwise have caused us to lose.  I believe the children with us here today, and their children in the future, will thank us more for being forward-looking in our actions now, rather than arguing over past failures.

“This is a hugely symbolic day, both for me personally and the forestry industry – and probably the proudest day of my working life.”

Mr Howard, whose two children will also plant trees on Friday, said he was delighted that Conservative MP Anne-Marie Trevelyan and North-East England Labour MEP Paul Brannen – both supporters of the project – were attending.

Paul Brannen said: “The new forest at Doddington is both a good and bad news story – good in that new forests can make a significant contribution to tackling climate change as the trees absorb carbon, but bad in that Doddington has again proved that new forests are far too difficult to get permission to plant. Let’s hope this new forest is the first of many and not the last of far too few.”

Richard Greenhous, Director of Forest Services at the Forestry Commission, said: “Doddington is a remarkable project that has served as a learning experience for all of us, informing future processes, and leading us closer towards achieving the government and forestry sector’s ambitions to plant more trees in this country.

“We’ve worked hand in hand with the applicant, Natural England and the Environment Agency to get to this major milestone, and stand ready to support other landowners by helping them receive the benefits of woodland creation.”

Stuart Goodall, Chief Executive of forestry trade body Confor, said: “This is a tremendous day for forestry in England. Andy has had to work his way through a really challenging and complex set of rules for forest creation, designed for a different generation. Andy has broken the mould and others following in his wake will reap the rewards of his efforts at Doddington.”