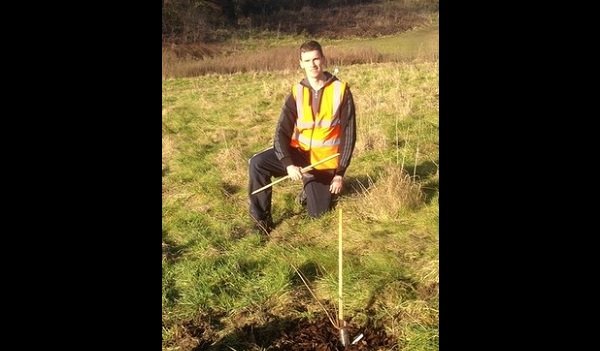 Five elm saplings have been planted in Bath as part of a project to increase the number of mature trees that are growing in the city.

Mature elm trees are a rare sight in England, and it is hoped the saplings, planted at Weston Park, will help change this. Wessex Water employee Alex Morley has been working with the Conservation Foundation and Bath and North East Somerset on the project.

More than 20 million elm trees were lost after the accidental introduction of Dutch Elm Disease into the UK in the 1960s.

The new saplings will be monitored to see whether they survive the disease, which usually strikes once elm trees have reached 15 years or older.

Experts at the Conservation Foundation have identified a few mature elm trees that appear to have survived the disease. These trees still stand, seemingly unaffected, in areas that were otherwise decimated.

It is hoped that sapling clones from these trees will grow up to be resistant to Dutch Elm Disease, or will be unattractive to the beetles which carry it.

Mr Morley, who lives in Bradford on Avon, became interested in the project after spotting a young elm when he was out walking. He hopes the project will help to restore a lost component of England’s ancient landscape. The 32-year-old said: “I was walking by Entry Hill Golf Course and I saw a type of tree I had never seen before.

“It turned out it was a little Wych elm. The fungus is carried by a beetle, but it doesn’t attack until they are 15 years old.

“The one I saw is probably going to die.

“Elm trees have unique insects and micro-organisms associated with them, including the white letter hairstreak, and large tortoiseshell butterflies, both of which are sadly now endangered. When I was planting them a lot of people were walking past with their dogs and asking me about them.

“The public like to hear about conservation projects and I’ve noticed they do take an interest.”