What Do I Plant Next? – A seminar with Peter Thurman and Barchams’ Keith Sacre 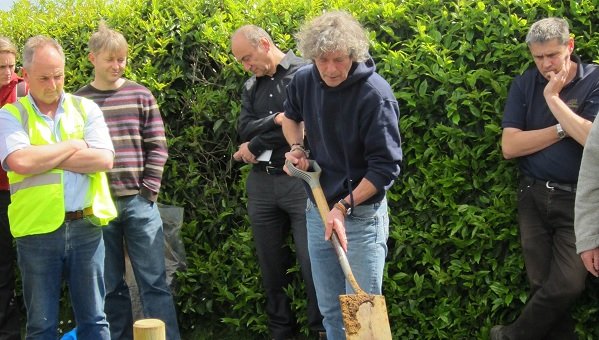 Peter Thurman’s first presentation of the day was based on collaborative work with Tony Kirkham of the Royal Botanic Gardens, Kew.  He began by asking the question “What do I plant next?” against the current background of pests and diseases which is making tree selection ever more difficult.  He highlighted the fact Kew Gardens was laid out from 1845 mainly in family order, which seemed a good idea at the time, but is rather more worrying today when pests and diseases can threaten families and potentially devastate them because of their members’ proximity to each other.  “Very useful for pathogens!”, commented Peter.

He stressed the importance of learning plant families and went on to look at the taxonomy of Quercus, Aesculus and Fraxinus, which are facing serious threats, from oak processionary moth, horse chestnut leaf miner and ash dieback respectively, to see whether there are species within the genera which can resist them.

For example, Quercus is divided into Sub-genus I Cyclobalanopsis, Sub-genus II Erythrobalanopsis and Sub-genus III Lepidobalanus.  While the threat of oak processionary moth  may deter us from planting oaks, it attacks only Sub-genus III, which includes Quercus cerris, robur, suber, gallifera, ilex, with its favourites being cerris and robur.  It does not threaten Sub-genus I (Quercus glauca and oxyodon) or Sub-genus II, which includes willow oaks, black oaks, scarlet oaks, plus Quercus agrifolia and wislizenii.  So we can continue to plant oaks as long as we are selective.

Aesculus is facing  threats, with one of the biggest being horse chestnut leaf miner (HCLM).  Once again careful choices need to be made, but there is no need to stop planting all Aesculus species.  The genus comprises five sections – Parryaneae, Aesculus, Calothyrus, Macrothyrsus and Pavia but it is only those in Section Aesculus – A hippocastanum and A turbinata – which are susceptible to HCLM.  All the other species in the other four sections are unaffected.

Peter recommended Aesculus californica as a very good small tree and in doing so referred delegates to John Medhurst’s websitejohnmedhurstlandscape.co.uk which lists and illustrates the range of trees to be found in Greater London in the early 21st century.  Medhurst reports he knows of only one example of the Californian oak visible from the road, this being in Kennington Park.

Peter Thurman believes Aesculus indica (from Section Calothyrus) is superior in every way to A hippocastanum.  Aesculus indica Sydney Pearce, named after a former curator of Kew Gardens, is a splendid cultivar and is particularly floriferous.  He also praised Aesculus parviflora (dwarf buckeye), a large, suckering shrub, as a good choice for landscaping.

Chalara fraxinea (ash dieback) has hit the headlines.  Ash trees dominate the British treescape, and it is young trees which are most at risk.  Fraxinus is divided into Section 1 Ornus and Section 2 Fraxinaster.  Section 1 is divided into Sub-section 1 Euornus, which comprises Fraxinus ornus and F paxiana, and Sub-section 2 Ornaster, which comprises Fraxinus chinensis and F longicuspis, all of which are resistant to Chalara and can still be planted with confidence.  It is those in Section 2 Fraxinaster, Sub-section 4 Bumelioides – Fraxinus excelsior and F angustifolia – which are the most susceptible.

Peter recommended Fraxinus ornus (manna ash) as a good, but underused alternative as both a street tree and for garden use.  This has been grown here since before 1700, producing creamy white fragrant flowers in spring and good autumn foliage turning from yellow to orange and red.  It is a fine choice for drier, calcareous soils and sandy loams.  Fraxinus americana is another good choice.

What of future threats, which may soon be making their way to the UK?  Asian long-horned beetle, emerald ash borer, canker stain of plane and pine processionary moth are four of the most serious.  The Asian long-horned beetle is a serious problem in North America, with several genera known to be susceptible.  Emerald ash borer is similarly serious there, but we do not yet know which species are susceptible to it.  Canker stain of plane is an American pathogen which originally came to Europe from the USA in wooden ammunition boxes during World War Two.  We know it is already in Paris and may be as far north as Brittany.

Peter told us he had witnessed at first hand the devastation pine processionary moth has wreaked on the hillsides of Italy, reminding his audience that many garden designers buy trees from Italy.  It does not pose the threat to human health oak processionary moth does, but many pines, including Scots pine, plus cedar and larch are known to be susceptible.  Staying in Italy, the sweet chestnut gall wasp is a problem where nuts are grown as a crop, causing a moratorium on the species in that country.

Barcham’s Keith Sacre then spoke about a benchmark for vitality relating to trees.  When managing tree populations, he feels a good mix of genera helps to create resistance to pests and diseases.  Bio-security is a hot topic at present, but Keith feels most of us have different perceptions of what this is.  “We prefer to look to others to lead the way”, he said.  His belief that few tree buyers ask how long the trees they are purchasing have been in the UK was reinforced by a quick show of hands from those present.  “Many trees do not stay on the nursery.  They go out again as soon as they come in, while some nurseries are traders rather than growers”, he continued.

Trees are normally assessed on external, morphological features, all of which are visual.  But Keith maintains many trees which may look fine are either dead or moribund at planting time.  Bearing in mind that up to 24 per cent of trees planted will not succeed, what was required was a simple ‘plant quality index’.

Keith went on to point out that part of tree specification often includes a clear stem of 1.8m, but how many of us realise this is probably nothing more than so the nursery tractor can pass unhindered underneath?  He also believes very few specifications include mention of root systems – again a belief borne out by a quick delegate poll.

Around five years ago, Keith and Dr Glynn Percival of Bartlett Tree Experts felt it was time that the physiological aspects of trees should also be assessed when determining their state of health.  After much discussion, it was decided that Bartlett would conduct tests on Barcham’s trees to look at leaf fluorescence, chlorophyll content and electrolyte leakage as the three main aspects of their physiological health.  The first two are based on the on-site, non-invasive, non-destructive photosynthetic examination of leaves, while the third is a laboratory test.  In the first year, Bartlett reported on 15,000 trees on the Barcham nursery and found the health of 99 per cent to be sound.  In the subsequent years 600,000 leaf samples have been taken, which has been formed into a benchmark system of the physiological health of trees – or a plant quality index.

In the third session of the morning, Keith spoke about the newly introduced BS8545: From Nursery to Independence in the Landscape, for which he was the prime mover.  Published on 25 February 2014, BS8545 was the culmination of four years’ thinking, talking and drafting.  It sets out good practice in strategic and policy formation, and then follows the whole transplanting process through to independence in the landscape, under seven clause headings.

Each clause includes a flow chart, making each process broadly linear.  The first part of the document (19 pages) is pure recommendation.  Each recommendation can be used as part of a specification, although the standard concedes not all elements may be achievable in every situation.

The second part of the document is a set of annexes, published in the same order as the recommendations.  These tell why the recommendations have been made.  It concludes with a full bibliography of source material for further reading.

Keith commented that the standard has some controversial elements, such as the subject of bio-security.  The recommendation trees spend at least one full growing season on a UK nursery and be subject to a full pest and disease programme was lost to an EU ruling saying this would be detrimental to trade.  Barcham has, however, adopted this practice independently.

Peter Thurman continued the day by looking at other aspects of working with trees.  He feels plant handling and despatch should be specified, asking for delivery in covered vehicles.  Access should be checked and unloading should be supervised.  “Planting is often a waste of time and money – sometimes little more than a photo-opportunity”, he said.

Soil evaluation is important, with a postcode database of soil types available at the LandIS website landis.org.uk  Rubble under the soil may not always be a bad thing, as it allows carbon dioxide to escape, but compaction can be a killer.  “Break up any circling, fibrous roots just before planting a tree – you will not hurt it”, said Peter.

Prior to a planting demonstration by Peter and Keith, Peter said he felt many tree pit designs are overly complex.  Planting holes should be as wide as possible, but only as deep as the root system of the tree. Always plant with the root flare visible, Peter counselled.  And remove any stakes as soon as possible after planting, ideally after the first year.  Never feed a tree at planting time, but wait until it is in its third year in the ground.

Saturate the tree to field capacity immediately after planting.  If using irrigation rings, these need to be capped, but often become a refuge for roots as they hold oxygen.  Reusable gator bags are a good idea, especially on private plantings.  Peter believes mulches to be important and mentioned trees in Kew Gardens are mulched out as far as the dripline.  Strimmers and mowers can do trees great damage.

As is usual at these well-attended Barcham seminars, delegates enjoyed an informative, relaxed and thought-provoking day from two leading arboricultural authorities, the opportunity to network and to inspect the extensive range of trees on the nursery.