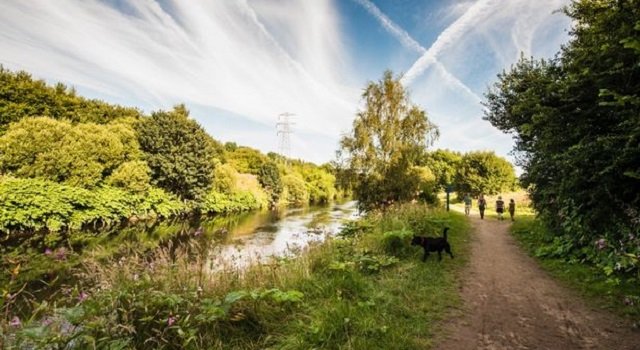 City Forest Park, a green haven over 800 acres, would span areas of Salford, Bury and Bolton along the route of a valley between the rivers Croal and Irwell.

Land shaped by industrial decline would be transformed into a ‘new green-beating heart for Greater Manchester’ and boast 45 kilometres of paths and cycleways. It could also host music concerts and festivals.

It’s hoped to secure initial funding of £1m through grants, funding and sponsorship, but private sector investment is needed to turn the vision into a reality over years.

The exact site is bigger than Regent’s Park and Hyde Park in London put together and is connected by river, road and cycleways to Manchester city centre.

It was home to coal mining, chemical works and manufacturing. The old Agecroft power station dominated the skyline under a derelict canal, rail line and sewage works.

After heavy industrial decline, work to regenerate the stretch of the Croal-Irwell Valley began almost 10 years ago under the Lower Irwell Valley Integrated Action plan.

Pathways were built and thousands of trees planted, but the new plan aims to build on that work over what is believed to be the largest public green space in Manchester.

The park would incorporate the Irwell Sculpture Trail and culture and the arts would also be represented.

City of Trees, a charity spearheaded by The Oglesby Charitable Trust, the Community Forest Trust and other partners, are behind the plans.

They aim to offer light shows and sculptures and work with the Manchester International Festival and Manchester’s HOME arts complex to broker partnerships to bring the park alive with art, shows and performances.

Pop-up markets and educational courses for schools could also feature.

Tony Hothersall, from City of Trees, said: “With the right investment, we will be able to realise City Forest Park’s full potential and give the region the inspiring green space and culture hub it deserves and needs.”

Salford Mayor Paul Dennett said: “Green spaces are vital for cities like ours. They provide a breath of fresh air in a dense urban environment, beautiful natural landscape and not to mention they’re good for the environment.

“This is a huge opportunity for our city. I am proud to put my name to this idea, and I hope the people of Greater Manchester share my enthusiasm.”

Coun Alan Quinn, Bury council’s cabinet member for environment, said many thousands of trees would be planted. He added: “It will be a place of natural beauty, 330 hectares in area, 15 minute walk from the suburbs of Greater Manchester.

“It will support wildlife, clean our air and provide a place of tranquillity for everyone to enjoy.”