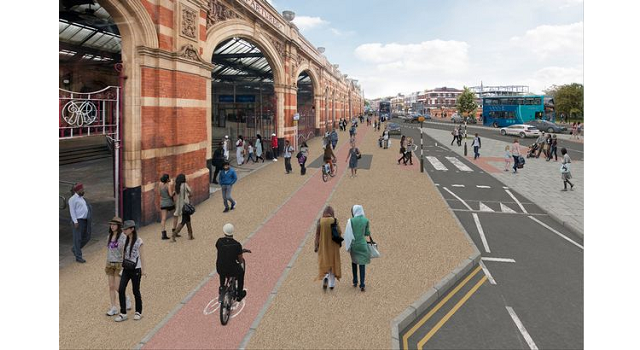 Sir Peter Soulsby has indicated plans to run cycle lanes up London Road may be changed to save 18 trees from being felled.

The trees on the edge of Victoria Park could be sacrificed under current £2.9 million plans to improve cyclists safety along what is one of the busiest roads in Leicester.

However that element of the proposal has proved contentious, with campaigners saying the removal of the trees is unacceptable and unnecessary.

Now, after a public consultation on the scheme ended last week, the mayor has signalled a potential rethink on the trees.

He said: “What we need to do now is look very carefully at what people have said about the plans as they stand.

“With regards to the trees I have an open mind and I have seen the concerns that have been set out.

“It might be that we can proceed with a plan in which fewer trees, or none at all are lost.”

The council had, in any case, said the trees removed would be replaced by new ones nearby but the concern centres on the felling of mature specimens.

New off-road cycle lanes would be created – one inbound and one outbound – on either side of the road between Granby Street and Victoria Park.

Eric Ludlow of the Leicester Cycling Campaign Group said the plans were good but he has sought further reassurance on them.

He said: “Ever since the group was formed in 2012, we have been pressing for dedicated cycle tracks along the arterial routes into the city.

“We therefore welcome the proposed changes to London Road.

“But those tracks need to be continuous, prioritised and protected if they are to attract those who are currently reluctant to get on their bikes.

“The design as it stands does not allow sufficient protection and risks the tracks becoming impromptu parking spaces, as happens on Newarke Street and elsewhere.

“We urge the city council to give serious consideration to this, and the other points raised in our response, when making its final decisions.

“LCCG would like to discuss the detailed implementation with the council – but this will only happen if the redesign goes ahead.”

Sir Peter said the cycle lanes would be segregated ‘as far as is possible’.

He said: “Gone are the days of painting a line, putting down some green and calling it a cycle lane.

“There will be separation but obviously that becomes an issue at the junctions.”

He added: “If there is a persistent problem with people parking on the cycle lane there are several solutions such as wands, like those we have installed next to the cycle lane on West Bridge, or armadillos which are bumps that run along the route.”