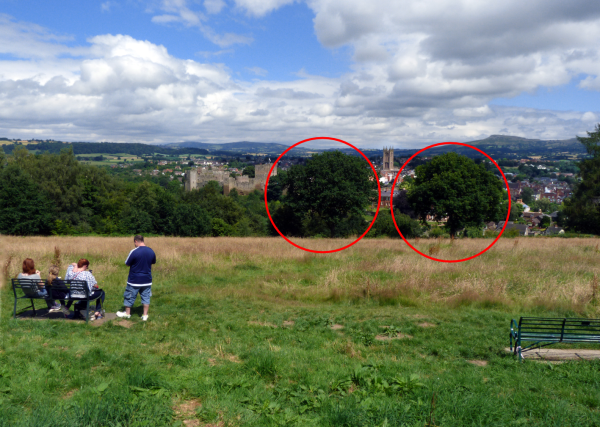 A plan to axe two healthy trees at a Ludlow beauty spot to improve the view has provoked a major row. In one hand there are those who want the trees to get the chop in order to improve the view from Whitcliffe Common but on the other hand, some people would like to keep the trees where they are.

Ludlow Town Council is part of the group that is objecting to the application to remove the trees and so is Andy Boddington who represents Ludlow on Shropshire Council.

He is behind the town council where Tim Gill has stated that he will want good answers when the Friends of Whitcliffe Common, who want the trees to come down, bring before the authority an application for funding.

“I will want to know why they want to cut down two perfectly healthy trees,” he said.

Andy Boddington is also very unhappy at the planned felling of the oak trees.

“That was the right decision and one I fully support.

“These trees should be preserved. The managers of the common want the trees cut down and coppiced to improve views towards the historic town. I don’t think this is sufficient justification. Axing good quality oak trees is the unacceptable face of environmentalism.”

“These trees are in a conservation area and do not themselves have tree preservation orders,” added Andy Boddington.

“They have general protection under which the applicant has to give Shropshire Council six weeks’ notice of any felling or other works. Permission is automatically granted unless the council issues a tree protection order.

“The contention with this proposal are two oak trees, which the Trust and Friends say are obscuring view of the historic town centre of Ludlow.”

But Andy Wright, a volunteer who works with the Trust, has backed the bid to get the two oak trees chopped down.

He said that management of the common is taken care of in a sensitive way.

“From time to time that means that trees have to be removed, most often it’s because they are dead, diseased and dangerous,” said Andy Wright

He accused people who oppose the cutting down of the trees of failing to see the full picture.

The argument for the felling of the trees is that they affect an ‘iconic’ view overlooking the town and that this will become even more of a problem as the trees grow.

Shropshire Council officials describe the trees as ‘magnificent’ and in other circumstances would warrant a tree-preservation order but have decided not to object to the application to take an axe to them.

“In this particular instance the amenity provided to local distinctiveness through the perpetuation and ease of access to an iconic view is also high,” states a Shropshire Council report.

“In the light of this and the stated intention of the Friends of Whitcliffe Common the council’s tree service does not object to the Friends’ group’s proposal to removal these trees because the range of reasons for removal supports a very rare situation where the loss of significant amenity trees is balanced by equivalent gains in another amenity.”