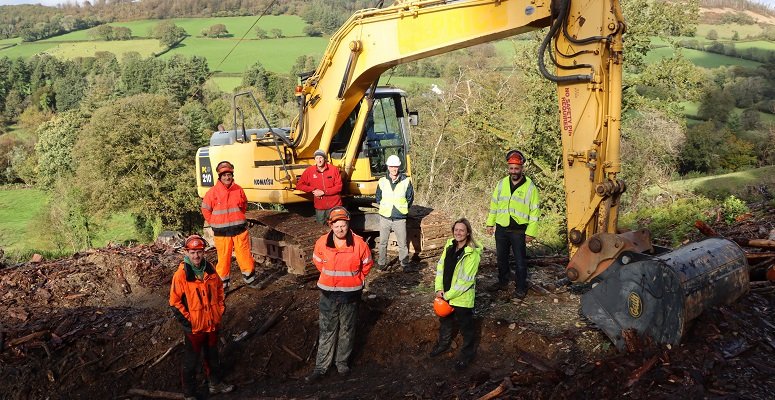 The Dolaucothi Goldmines Forest is leased to Natural Resources Wales by the National Trust and forms part of the adjacent Roman goldmines. It is rich in archaeology with designated Scheduled Monuments including Roman leats, water tanks, hushing gullies and quarry works intersecting the site.

Nine hectares of the NRW-managed forest were infected with larch disease (Phytophthora Ramorum) and needed removing. The trees were standing dead and posed a safety threat to members of the public and the archaeological features.

The site presented many challenges as there was no access to take timber out of the forest and it was really important to make sure the important historic features were not accidentally damaged by heavy machinery.

Natural Resources Wales worked closely with Cadw, National Trust, Dyfed Archaeological Trust and local landowners to understand where the remains were and to work around them so they remained safe and protected.

Thompson Brothers Timber Harvesting took up the challenge of the felling and designed an innovative system for the felling and extraction of the timber. Trees were cut into small pieces and sent in bundles across the landscape on a cable several metres above the Roman workings, down the hill to a landing bay below.

The work was carried out in two phases and was completed in August.

All of the felled timber has been sold as biofuel, which is a sustainable energy source and supports the local economy.

As the area is designated as Ancient Woodland, it will be restored to native woodland species such as oak, rowan and hazel.

Watch NRW’s video about the project to see the process in action: https://youtu.be/aoCNl8X6a88