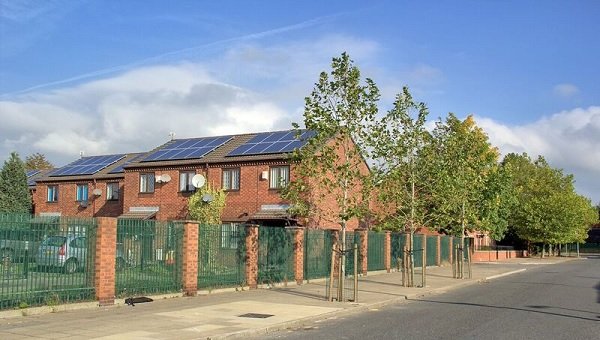 Initial results from the street tree research project, the first of its kind in the UK, showed the trees were able to hold 40% of the water run-off and delay the rate it went back into the sewer by 2 hours.

Three London Plane trees were planted in a specially designed trench in Howard Street, Salford, Greater Manchester in June 2015 with the aim of capturing the impact that trees had on both cleaning polluted water from road run off and managing levels of surface water, which can lead to flooding.

The ground-breaking study is a partnership between the Environment Agency, The University of Manchester, City of Trees, United Utilities, Urban Vision and Salford City Council.

The trees were planted in a specially designed pavement, where rainwater running off the road was diverted before going back into the sewer system the other end. Using specialist equipment, a team from The University of Manchester has been monitoring the quantity and quality of the rainwater as it enters and leaves the trench.

The project, which will run for three years until 2017, has already produced promising initial monitoring results which reveal that the average water volume retention by the tree pit system was approximately 40% and the average storm peak reduction was 50%. Storm waters were also slowed by the system by up to 2 hours.

Dr James Rothwell from the University of Manchester said “These results demonstrate that retrofit tree planting schemes in towns and cities can be used as a nature-based solution to tackle urban flooding”.

The project is part of the Irwell Catchment Partnership’s initiative to improve the quality of our rivers, lakes and canals.

Katherine Causer from the Environment Agency said; “The Irwell Catchment Partnership is looking at the reasons why some of our rivers are not achieving legally required water quality standards.

One of the reasons is that pollutants from the urban environment, such as run-off from the road network are entering our rivers through the surface water drainage system.

Projects like this one will give is the evidence we need to help make the rivers of the Irwell Catchment cleaner. They provide innovative and cost effective solutions to these complex environmental problems.”

Steve Chatwin-Grindey, general manager for DeepRoot UK, said: “An innovative box crate system called Silva Cell has been installed under the pavement to help manage the surface water and create a better growing environment for the trees’ roots.

This system is widely adopted in the USA but this is the first time that it has been used as part of a research project in the UK and we are really excited to see the results.”

As the population here in the UK continues to increase, more green space is being built on which means a reduction in the number of places for water to drain naturally into the ground.

The loss of green spaces means that increasingly more rainwater drains into our sewer systems which were not designed to cope with the rising number of storms and as a consequence we are seeing a greater frequency and severity of flooding in our towns and cities.

As well as managing rainwater it is hoped that this project will demonstrate how trees can clean pollutants, providing a natural alternative to the expensive physical, biological and chemical processes that are employed by water utility companies at their sewage treatment plants.

A representative from United Utilities says; “It is our job to ensure three million households and 200,000 businesses in the North West have access to clean, clear water every day and that waste water is dealt with effectively and efficiently.

The trees are situated in Howard Street in the City of Salford which was hit by severe floods on Boxing Day 2015, the worst in 70 years, affecting hundreds of homes.

Cllr Derek Antrobus, Lead Member for  Planning and Sustainable Development at Salford City Council comments; “We must seek innovative solutions to the environmental challenges which urban areas like Salford face.

With many experts predicting climate change, leading to increased rainfall and greater instances of flooding, these challenges are likely to become even more of an issue in future”.

As well as the benefits of cleaning polluted water and managing surface water, trees have a host of other advantages.

Peter Stringer, special projects manager, from the City of Trees team comments; “Trees are often viewed as a ‘nice to have’ but they provide a whole range of significant benefits to both people and the environment.

This project demonstrates how important trees are to urban areas – why we need to plant more of them, and protect the ones we have”.