The pineapple palm tree at Torquay’s gateway disappears and reappears 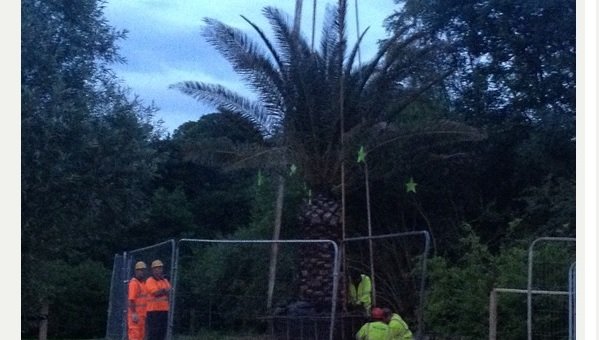 Torquay’s infamous pineapple palm tree disappeared from its prominent position at the gateway to the town – only to reappear a few hundred yards down the road.

Council workers and contractors moved in to remove the controversial pineapple palm tree on Thursday night. All that was left behind was a bed of boulders at the Kingskerswell roundabout.

But then the palm was taken just down the road to a small wild meadow at the Browns Bridge Road junction with Riviera Way.

A giant crane was employed to lift the crane into its new home as a team of workers looked on and road diversions were set up.

It is not known why the palm – which courted controversy when Torbay mayor Gordon Oliver had it shipped in at the cost of thousands of pounds – has been moved. But it was always planned to make way for the Kingskerswell bypass work.