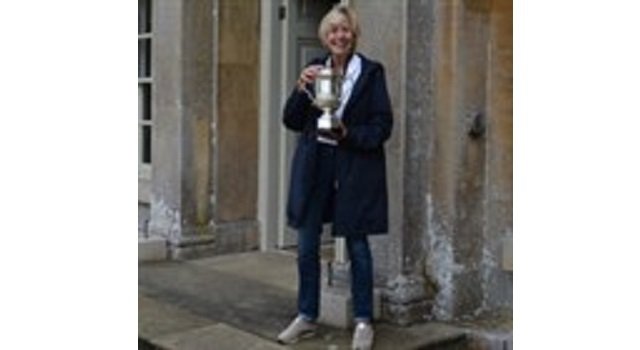 The renown timber furniture manufacturer and one of the founders of Woodland Heritage, Peter Goodwin, has been posthumously awarded with the Sylva Trophy for his outstanding contribution to forestry by the Royal Forestry Society (RFS).

The Trophy was presented to Peter’s widow Sally at the 2017 Excellence in Forestry Awards at Grimsthorpe Castle by Sir Jack Whitaker, immediate past President of the RFS.

Receiving the award, Sally said how delighted the family was to receive the award, describing it as like winning the Olympics of forestry. Peter had received the Royal Forestry Society’s Gold Medal for distinguished services to forestry in 2010.

At aged 18, Peter had joined the family firm of Titchmarsh and Goodwin in Ipswich manufacturing fine period furniture.

On his father’s death, he and his half-brother ran the company for many years. Peter scoured the country for timbers suited to its manufacture – no tree of any value escaped his discerning eye. He knew where the best oak grew, where yew and walnut flourished, where burr could be found and fruit woods purchased. He bought a sawmill at Witnesham to convert and season his purchases.

In 1994 Peter and fellow furniture manufacturer, Lewis Scott, established the charity Woodland Heritage to connect the growers of timber with all those who used it, from makers of fine furniture to makers of hurdles.

Peter was a member of the Royal Forestry Society’s East Anglia Division and an energetic chairman of the division for some time. For a decade he served on the RFS Council. When acute oak decline was recognised Peter raised over £2 million to help Forest Research employ Dr Sandra Denman and her team of dedicated scientists.

He was described by one forester as ” the beating heart of forestry.”

The Sylva Trophy was donated to the RFS by Patrick Evelyn, a direct descendent of John Evelyn, author of the seminal 17th century ‘Sylva or a Discourse of Forest-trees and the propagation of Timber’. It is presented annually to recognise a person or organisation who in the opinion of the RFS has made an outstanding contribution to forestry in its broadest sense.