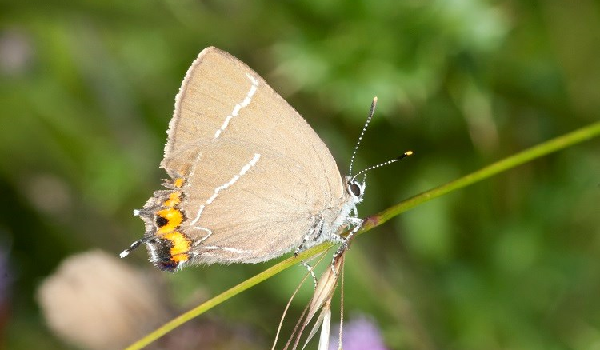 As part of local plant recording activity carried out by experienced amateurs in Surrey, plant samples were sent to the RBGE – one of a UK-wide network of environment-related organisations working together to tackle plant health issues – for identification. When an elm specialist examined the samples, the distinctive feeding damage was spotted. This is the first evidence of the pest in Britain.

The invasive alien zigzag elm sawfly, Aproceros leucopoda, is native to East Asia. It was identified as a new pest of elms in Poland and Hungary in 2003 and has since spread to many other European countries. It can reproduce asexually which means that a population can build up very quickly because females don’t have to find a mate. While this pest won’t kill a healthy tree, the larvae can strip an elm of leaves and therefore deprive native caterpillars of this food source. The endangered white letter hairstreak butterfly, for example, depends completely on elm as a food source for its caterpillars.

For this reason, the zigzag elm sawfly has been added to the Observatree list of priority pests. Through this citizen science project, trained volunteers conduct surveys for particular pests, thereby acting as an early warning system for new pest introductions.

This chance discovery highlights the importance of volunteer contributions to citizen science projects. With help from the public on projects like Observatree and Nature’s Calendar, we can collect and analyse so much more data from the natural world to help scientists draw more accurate conclusions and plan for the future.

The RBGE has called for members of the public to look out for signs of the new pest. New records are important to help confirm the presence and range of this insect. Adult insects, larvae or even the pupal cases, where larvae transform themselves into adults, would provide definitive evidence. The unmistakeable zigzag leaf damage pattern – reminiscent of the Mark of Zorro – is easy to spot. If you have seen it, please submit your sighting using TreeAlert, the online reporting tool developed by the Forestry Commission to track tree health problems.