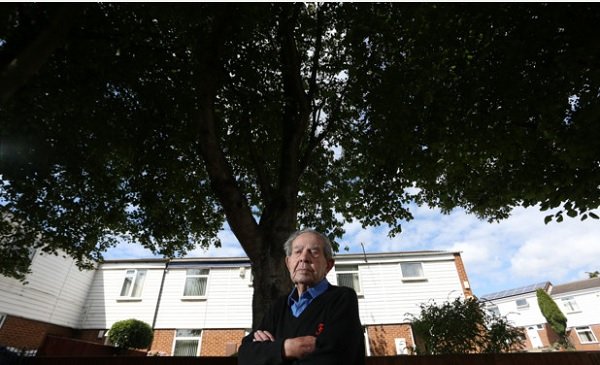 Retired civil servant Frank Westbury is urging the council to cut down three trees which are leaving him in “claustrophobic” darkness.

The 92-year-old says three trees in St Ann’s outside his house – reaching up to 60ft – stop him from being able to read his daily Post.

Two lime and one cherry tree obstruct his view and he claims he “can’t see the sky” and has to turn his lights on in the afternoon.

But Nottingham City Council says it can not make special exceptions for issues with light.

Mr Westbury, of Sullivan Close, said: “In the evening, when you’d expect some light, it’s absolutely pitch black. I can’t read my newspaper. At the moment we’re having some bright days and I still have to switch my lights off at 3pm. In the winter it’s much worse. It feels really claustrophobic.”

A plum tree also obstructs some light from his kitchen window from behind his back garden’s fence.

“I feel hemmed-in from both sides. If I want to do anything in the kitchen I need the light on, even if I’m just trying to butter a slice of bread.” said Mr Westbury, who has lived on Sullivan Close since 1975.

Next door neighbour Denise Knight, 53, said she has a similar problem and understands Mr Westbury’s concerns.

“The other side of the street gets plenty of light but this side is terrible,” she said. “It’s like a shadow is cast over us in the afternoon.”

Mrs Knight does not think the trees offer anything to the area.

“They are an eyesore if you ask me,” she said. “When it’s windy the leaves blow into gardens and the sap comes off, which isn’t nice.”

A spokesman for the council said the road’s trees were inspected last year, and the tree team found no need to prune or remove the trees.

“There’s a rolling programme of inspection,” he said. “Every tree in the city will be inspected every three years.

“There’s no automatic right to light and we can’t make an exception in this case.”

He explained that trees within two metres of a house could be deemed a health and safety risk, which could mean they get bumped up the pecking order.

“Pruning is carried out sparingly,” he added. “If the trees were closer to the property then something could be done.”

The trees are around 12 ft from Mr Westbury’s home.