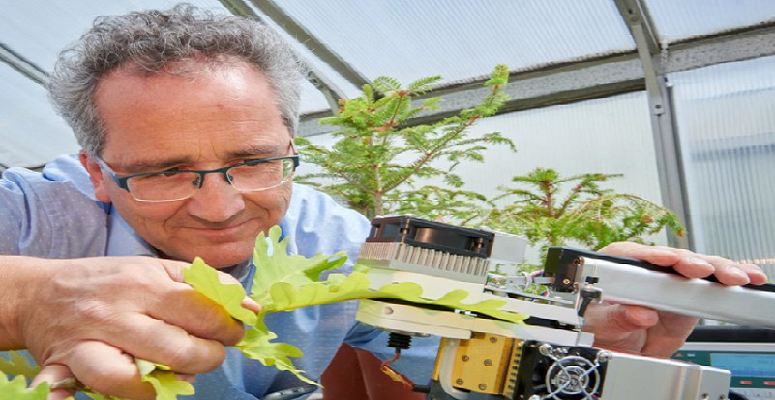 Particulate matter deposits on leaves increase plant transpiration and the risk of plants suffering from drought. Particulate matter could thus be contributing more strongly to tree mortality and forest decline than previously assumed. This is suggested by results from a greenhouse study led by the university of Bonn, in which tree seedlings grown in almost particulate matter free air or in unfiltered air were compared.

The impact of particulate matter on human health has gained widespread attention, but little is known about the effects that fine particulates can have on plants. The phenomenon of forest damage after dry years has been found to be accelerating globally, as has been reported from the southwestern USA and more recently from Africa, where large baobab trees are declining. “There have been different explanations for these regional events, but a comprehensive explanation is still missing,” says Dr. Juergen Burkhardt from the Institute of Crop Science and Resource Conservation (INRES) of Bonn University.

Tiny pores in the leaves, the stomata, are the gatekeepers that regulate how much water vapor is released to the atmosphere. But stomata also admit carbon dioxide, which is essential for photosynthetic production of energy storing sugars. This causes a dilemma for plants, between thirst and starvation: Closing the stomata saves water but restricts the uptake of carbon dioxide. Vice versa, open pores allow carbon dioxide to enter, but at the cost of increased water loss. Burkhardt: “Plants have adapted stomatal regulation to prevailing ambient conditions over evolutionary timescales, but particulate matter concentrations were generally much lower than they are today.”

Together with colleagues from the Centre of Ecology and Hydrology in Edinburgh (UK), the Meteorological and Hydrological Service in Zagreb (Croatia) and the University of California at Riverside (USA), scientists from Bonn University have found that particulate matter affects stomatal regulation. They showed that Scots pine, Silver fir, and Common oak seedlings that had been grown in greenhouses with filtered, almost particle-free, air released less water than seedlings grown in greenhouses exposed to the ambient, moderately polluted air of Bonn city. This observation even applied when stomata were completely closed.

In a recently published study from the same research group, plants grown in filtered air transpired less than plants in ambient air, despite having the same stomatal aperture. “Thus, the deposition of particulate matter increases foliar transpiration,” Burkhardt sums up. “These experiments point to a direct, but so far missing, link between air pollution and drought vulnerability.”

A major part of atmospheric particulate matter is hygroscopic, encouraging humidity in the air to condense. On leaf surfaces, the resulting liquid water can also be formed from transpired water vapor and hygroscopic particulate matter. “These are tiny amounts of water, however, invisible to the naked eye,” says Burkhardt, “and rather than being pure water, they are highly concentrated salt solutions.”

The salt solutions may eventually creep into the stomata as liquid films, forming very thin, but continuous liquid water connections between the leaf interior and the surface. These may then act as a wick that carries water through the stomatal pores to the outside of the leaf. Burkhardt: “The stomata partially lose control of transpiration and plants become more at risk from drought.”

Particulate matter is difficult to detect on leaves

In the electron microscope, the salt solutions appear as crusts, present in ambient air but missing on seedlings from filtered air. “Such crusts have been observed on damaged trees in the past, and the phenomenon was then named ‘wax degradation’, but its origin has remained elusive,” says Burkhardt. “Particulate matter, which is usually imagined as small granules, has not been considered a contributing factor,” says the Bonn University scientist.