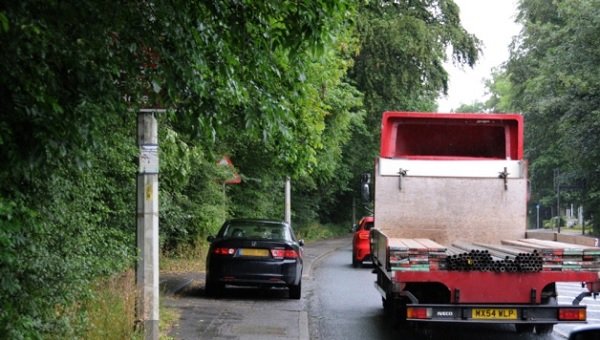 A sign warning of new speed restrictions on a major Lancashire road has been almost completely hidden by overhanging tree branches.

The maximum limit on the A6 near Broughton has been reduced from 40 miles per hour down to 30.

But motorists fear the sign telling them new restrictions are in force cannot be seen from the road.

Maggie Waltham, who lives in Fulwood, spotted the obscured sign between the Broughton Roundabout and Broughton village, on the northbound carriageway.

She said: “I was out on my bike and I saw that where they have put road signs up to say the new speed limit is in force, one is totally obscured by the overhanging branches.

Maggie, 58, said: “I had noticed it the other night and then I went for a cycle past to have a second look to make sure my eyes weren’t deceiving me.

“There’s all overhanging branches of the trees and you just can’t see the sign at all.

“I think they should have made it a bit clearer.

“There is another sign further towards Broughton which is clearly visible, but the first you just wouldn’t notice at all.

“I just thought it seemed a bit of a waste of time putting the sign there when nobody can read it.”

She added: “People are so used to 40 miles per hour they might not have noticed things have changed, especially if they can’t see the sign until they get to Broughton where there is another.”

“The 30mph signs were installed two weeks ago and other temporary signs displaying the warning ‘New 30mph speed limit in force’ have been put up this week to warn motorists about the change of speed limit.

“We’re planning to cut back overhanging branches throughout the area covered by the new limit this weekend and will be carrying out speed surveys over the coming weeks.”