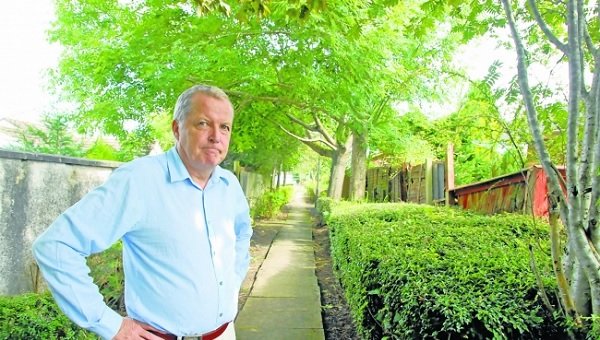 “Trees come before humans in North Ayrshire!” That’s the claim of an Irvine resident demanding that overgrown trees in one area of the town are removed.

Andy Hough, who lives in Girdle Toll, has been relentlessly campaigning to North Ayrshire Council to have the trees chopped down, believing they are a safety risk.

Earlier this month, a 17-year-old girl was subject to an alleged sexual assault near a wooded area off Bank Street, not far from Andy’s home in Braehead.

The underpass area near the area of the alleged assault has been the subject of complaints from residents for years due to it’s intimidating setting surrounded by trees.

Andy was prompted to highlight the issue to the Times in light of the alleged assault.

But the issue is also affecting him personally.

As shown in the picture above, trees are hanging over Andy’s garden which he claims could kill someone were they to fall down.

Speaking to the Times, Andy insists that NAC are refusing to consider the potential safety risks.

He said: “The trees around Girdle Toll are totally overgrown. It’s particularly a problem because of the pathways and the underpass are absolutely covered by the trees.

“They’re hanging over my garden too and I spoke to a tree expert who basically said that the trees from my house are falling over, it’s like a jungle.

“I’ve been fighting the council on this for a while now but they’re refusing to listen. I’ve also been in touch with Brian Donohoe about this but I don’t know if he’s getting anywhere with it either. I put the question to North Ayrshire Council about the trees being a risk but they said it was fine and there was no problem. One of those trees outside my garden could easily fall down and kill someone. That area is not being maintained and the council need to do something about it. The area at that underpass can be quite intimidating and after the incident near there recently the council really should be taking action to clear those trees.”

A spokesman from North Ayrshire Council said: “We received a request last week with regards to trees adjacent to the underpass at Manson Road, Irvine. A site visit was carried out on Wednesday, August 13 and, from that, a programme of work has been drawn up. The first part of the programme has already been carried out. Much of the undergrowth has been cut back and, over the next two weeks, the trees along the path will be attended to, some being thinned and others felled. Any growth that is obstructing lamp columns will be removed in order to increase the amount of natural light at the site.”