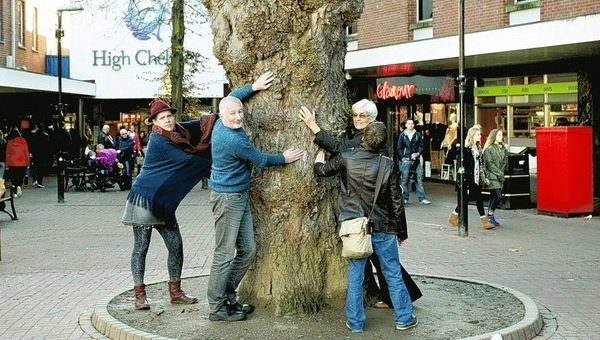 A tree voted the most loved in Chelmsford is under threat of being torn down to make way for a shopping centre revamp.

Plans to improve the “dated” Exchange Way entrance to the High Chelmer Shopping Centre into a food quarter would involve cutting down a large London Plane tree, thought to be hundreds of years old.

The tree was selected by representatives of the city centre’s community and groups as Chelmsford’s favourite tree as part of National Tree Week, which ran from November 29 to December 7, 2014.

“We wanted to draw attention to the fact that the tree is scheduled for the chop,” explained Simon Mouncey, 47, who lives in Chelmsford and is a member of Transition Chelmsford community group.

“No one knows how old any tree of this type is because they never die. If anything were to happen to this tree I think there would be a curse on Chelmsford.”

LaSalle Investment, which owns High Chelmer, has been given permission to fell the tree from the city council once alternative planting is in place. A tree preservation order is not in place.

But Mr Mouncey said: “We think there is still the possibility of saving it.

“The reality is that this is a healthy tree, it’s not in the way of services or utilities under the ground, so there is no reason to cut it down, apart from the make room for a few coffee tables. If we lose this tree, we will lose lots more because the developers will think that people don’t care about the trees here.

“The city has lost so many trees already – we need to make a stand. In the last nine to ten years, we have lost 450 mature trees within a half-a-mile radius of the city centre.”

“We want the council to have a tree strategy, like London has,” added Mr Mouncey.

“There has been a lot of effort to achieve this over the years, but the current administration doesn’t have any ideas or imagination. The county council measures Chelmsford in terms of the number of people who come here to shop, the number of high-profile shops they can bring here, and the number of cranes in the sky.”

A spokesman for Chelmsford City Council said: “La Salle Investments have secured planning permission for the provision of a new restaurant quarter in High Chelmer.

“The proposals include the loss of the London Plane tree subject to replacement trees being provided that will complement the new public realm works.

“A planning condition has secured details of the replacements to be planted.”