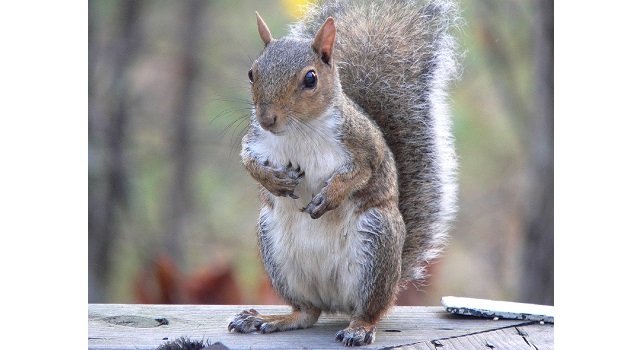 An oral contraceptive for grey squirrels could be the only chance future generations of people will have to enjoy the benefits of fully mature English oaks and other broadleaved trees in our UK towns and countryside, says the Royal Forestry Society (RFS).

The education charity warns that current populations of grey squirrel are reaching proportions which threaten the survival of some of our most loved species of trees. While the new contraceptive offers a very real opportunity to reverse the tide of damage, it needs the government and forestry sector to get behind a long term commitment to fund the five-year research programme required.

RFS Chief Executive Simon Lloyd explains grey squirrels represent the greatest threat to the health of broadleaved trees but currently, woodland owners can only trap and shoot the pest, methods which are not always wholly effective.

“Without more effective controls, grey squirrels will continue to strip bark of many broadleaves, including the iconic English oak, when they are young,” he says. “This exposes trees to stress and disease, causes irretrievable damage and can kill them. The cost of damage by grey squirrels to trees is conservatively estimated at £14 million a year.

“Prior to the introduction of the grey squirrels by the Victorians, broadleaved trees were able to grow to a size and girth that delivered the timber that built our historic Navies, created some of our oldest buildings and continue to live on in much prized furniture and craftsmanship.

“If more recently planted trees no longer reach their full potential it will have a measurable impact, both of the UK’s ability to grow hardwood timber, but also on the landscape for generations to come.”

News that research into a grey squirrel oral contraceptive by the government’s Animal and Plant Health Agency (APHA) in York has received an initial £39,000 investment from Defra, is therefore welcome, says Mr Lloyd.

A long lasting species-specific oral contraceptive would be far easier to administer than single-dose injectable immuno-contraceptives. However, a longer term commitment to a five-year test programme is required to look at dosage, at longevity of the dose and at how to administer the oral contraceptive to be species specific via bait-lacing in feeders or hoppers which only the grey squirrel will be clever enough to access. Funding for a pilot programme will also be required.

Simon Lloyd says: “It is pointless to plant oak and other broadleaved species where they are vulnerable to grey squirrel damage without a rigorous and sustained control programme. There is a high risk they will never take their place as a thing of beauty in the landscape or a valued source of high quality timber.

“We believe that oral contraceptives will be most effective when combined with trapping and shooting. Funding research into fertility control must become a top priority for government and the forestry sector.”

There are an estimated 3.5million grey squirrels in the UK. Scientists estimate around £1m will be needed to carry out a five-year oral contraceptive test programme and believe the oral contraceptive would cause populations to fall by around 90% over a few years. As a concept, it has received the backing of Prince of Wales.

£100,000 has already been raised by members of the Squirrel Accord, of which the RFS is a leading member, towards further research.