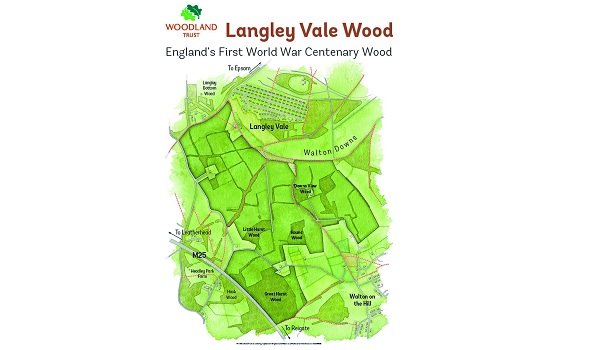 Plans to create a Centenary Wood in Epsom commemorating the First World War were outlined to visitors at an open day at the weekend.

The 640-acre forest is to be created at Langley Vale, on the border between Epsom Downs and Mole Valley, as part of a £12m project by the Woodland Trust to create four “flagship woods”, spanning 1,000 acres – one each in England, Scotland, Wales and Northern Ireland.

100 people attended the informative event, at Langley Vale farm, on Saturday, June 28, where they were talked through the proposals and given a tour of the site.

The trust said it will be planting 200,000 native broadleaf trees, with 40 per cent of the space remaining open “to retain the sweeping views through the valley”.

It is continuing to farm the land while it fundraises and awaits permission to begin planting the trees.

New paths will be created throughout the site, joining and extending existing rights of way including multi-use paths for cyclists and riders.

The trust also said it is looking at plans to create a 100-space car park in the most western corner of the site, adjacent to Headley Road and that the area near to Great Hurst wood will be left unplanted to enable natural regeneration of the woodland.

A spokesman for the trust added: “We are exploring the local links to the First World War and heard some fascinating family stories from those attending the event on Saturday.

“We hope we can bring these to life in some way on site.

“We hope to do some scanning on the Tadworth side of the wood next year to see if we can find evidence of World War One practice trenches we have been told about.”

Simon Bateman, site manager for the Woodland Trust said he was thrilled so see so many people attend the open day.

“Feedback was generally positive and it was a pleasure to finally introduce some of plans and features of Langley Vale itself,” he added.

“This will be just one of many events over the coming years, and it will be exciting to see how the site is due transform over that time.”

To make a donation to the project click here.